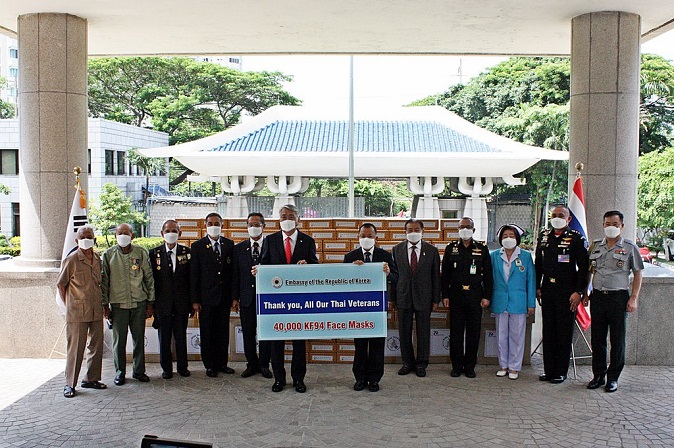 The South Korean government delivers 40,000 facial masks for Thai Korean War veterans and a veterans’ organization in a ceremony at the Korean Embassy in Bangkok on May 15, 2020. (Yonhap)

The military attache office of the South Korean Embassy in Thailand worked over a month to identify Thai veterans who fought in the Korean War to include them on the list of recipients of 1 million protective masks which are being sent to 22 countries worldwide amid the coronavirus spread.

Thailand is one of the 16 nations that fought for South Korea against invading North Korea under the U.N. flag. The Southeast Asian country deployed 6,326 troops and recorded 136 deaths, 1,139 injuries, and 5 missing in action.

The military attache office faced a problem of delivering masks to Thai veterans who weren’t on the official list of 513 war heroes received from the Thailand Ministry of Patriots and Veterans Affairs and the War Veterans Organization of Thailand, since the list was outdated.

The list didn’t specify if Thai veterans were still alive, or if they lived at the same address.

The military attache office decided to send a letter of appreciation to all of the contacts, asking the recipient to fill out a veteran registration form and send it back to them, if they still lived at the same address.

In a month-long effort, some 100 letters came back without replies due to wrong addresses. There were also around 30 replies that came from Thai veterans or their family members.

One of the Thai veterans said in a reply that he was moved by the efforts of the South Korean government to remember what happened nearly 70 years ago.

“Thank you so much for remembering me. My family and I are so grateful,” said a 93-year old former officer who fought in the Korean War.

The military attache office expects to receive more replies from some 300 letters that have not yet returned.

“We are truly ashamed for not being able to find them sooner, but also relieved to have found them during our mask distribution program,” said Col. Park Kwang-rae, the defense attache at the South Korean Embassy in Thailand.