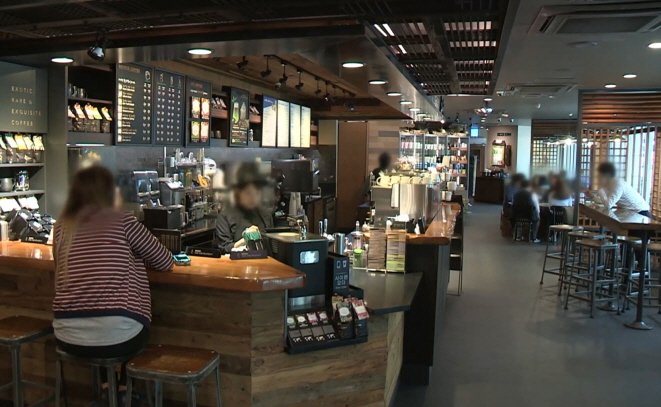 The actual price for a tall size americano at Starbucks is 4,100 won, 1,200 won more expensive than the price most preferred by consumers. (Yonhap)

SEOUL, Mar. 25 (Korea Bizwire) — A recent study has showed that the most comfortable price among consumers for a cup of coffee (americano) was 2,900 won (US$2.56), much lower than the actual price of americanos being sold in most coffee shops at over 4,000 won (US$3.53).

The Consumer Network for Public Interest (CNPI), a South Korean consumers association, conducted a survey of 1,000 adult consumers in December of last year, 35.3 percent of whom said they drink at least two cups of coffee every day.

Almost half of the respondents said they go to a local Starbucks store for coffee, followed by Ediya Coffee (18.6 percent), A Twosome Place (10.7 percent), and Angel-in-us Coffee (9.1 percent).

Respondents were evenly divided over their opinion of coffee pricing at small coffee shops, with 48.1 percent saying they don’t find prices to be either too cheap or too expensive, and 43 percent saying prices at small shops were quite expensive.

At 85.4 percent, the vast majority of the respondents, however, agreed that coffee prices at franchise stores were expensive.

Consumers felt 2,900 won was enough for a cup of americano at franchise cafes, and 2,500 won at private coffee shops.

The actual price for a tall size americano at Starbucks is 4,100 won, 1,200 won more expensive than the price most preferred by consumers.

Despite the gap between the preferred and actual price of coffee, 73.9 percent of consumers felt comfortable about how much they normally spent on coffee.

Only 17.1 percent said they wanted to cut down on coffee spending.

“The fact that consumers feel comfortable with how much they spend on coffee, despite the high prices, shows that they gain enough satisfaction from it,” said the CNPI.

“It means that there is still enough room for private coffee shops to grow.”