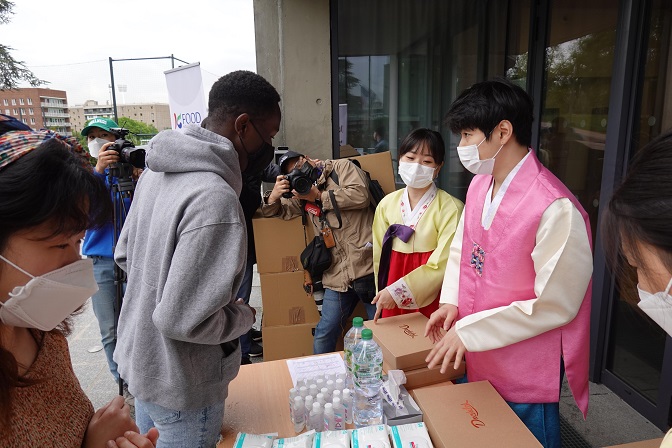 SEOUL, May 13 (Korea Bizwire) — The South Korean Embassy in France and Korea Agro-Fisheries and Food Trade Corp. (aT) on Tuesday (local time) held a food sharing event at the International University Campus in Paris, home to many study abroad students in France.

Embassy and aT officials distributed some 500 bulgogi or tofu lunch boxes and 1,500 meal kits consisting of tteokbokki (Korean snack made from rice cakes and red chili pepper sauce), spicy noodles, kimchi, and dried laver as a message of encouragement and solidarity with the students.

“I’ve been under a lot of stress recently since there are no jobs, but a gift like this really cheers me up,” said a Russian student living in the campus’s Maison de Coree, or Korean House.

The International University Campus in Paris was first established in 1928, and is currently home to some 12,000 university and graduate students, as well as researchers.

There are more than 40 houses named after foreign countries. Each house is required to offer at least 30 percent of its rooms to foreign students. Maison de Coree first opened in 2018.