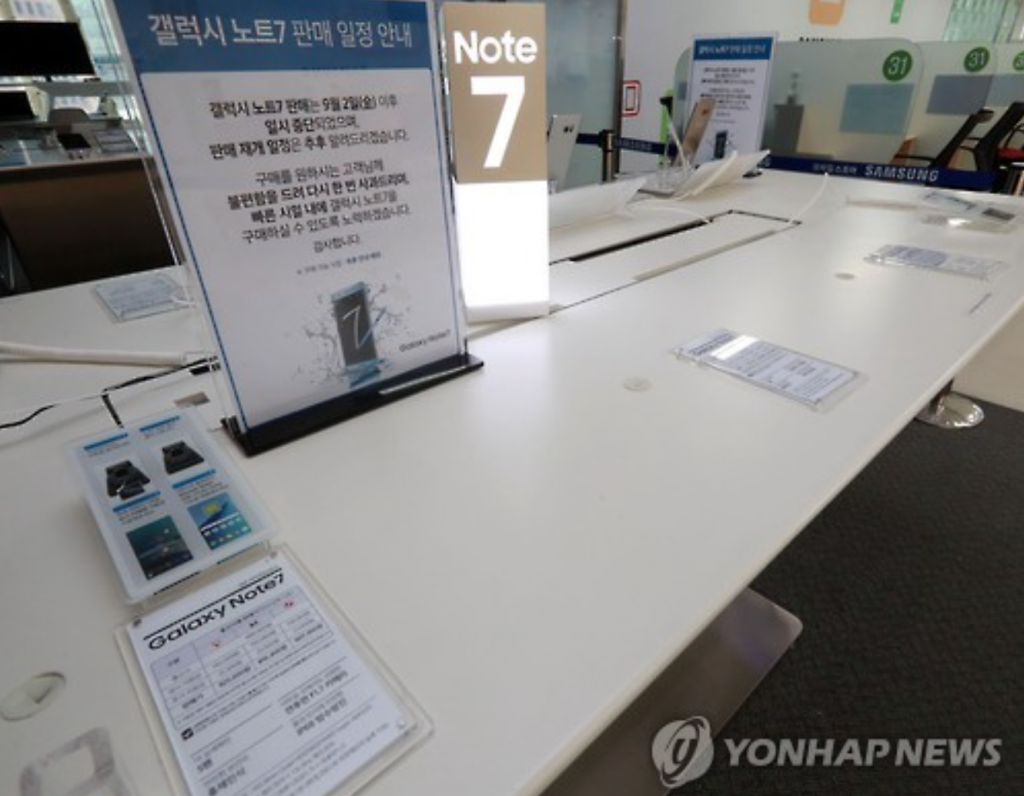 Galaxy Note 7 removed from the display at a Samsung service center in Seoul. (image: Yonhap)

SEOUL, Sept. 12 (Korea Bizwire) – Three days after Samsung advised its customers to stop using their Galaxy Note 7s and exchange them for temporary Samsung smartphones until the issues with the Note 7 are addressed, not many were found to have followed the guidelines.

The Korean tech giant posted an online notice to its customers on Saturday, shortly after the American Consumer Product Safety Commission (CPSC) recommended that users stop using their Note 7 phones. Samsung started providing its customers with temporary phones following the announcement of its voluntary recall measures.

“Although we did have more customers visit our service centers after we made the announcement, a large number of them returned without taking a temporary phone,” said a Samsung official Monday. “We believe customers are avoiding the inconvenience of replacing the phones, especially with the release date of the updated Note 7s approaching.”

“Our service centers will still strongly advise customers to use the temporary replacements.”

Consumers flocked to service centers over the weekend following the announcement by both the CPSC and Samsung Electronics. Yet, the majority only checked to see if their phones were showing any irregularities in the battery’s electric current, and expressed their intent to continue normal use of their device if no drawbacks were found.

“I was concerned (after the warnings), so I visited the service center,” said an unnamed Galaxy Note 7 user. “But when I found out about the process of being issued a temporary replacement, I decided to pass on the opportunity.”

Those who received temporary phones must revisit the service center from September 19 onwards to retrieve their old Galaxy Note 7, then head to their respective telecommunication company’s franchise store to get their hands on a new phablet.

“With the nuisance of visiting both the service center and their mobile carrier, the temporary smartphone program has been shunned, especially by younger consumers who rely heavily on their smartphones,” said an industry watcher. “But considering that the safety of consumers is at hand, service centers should make more of an effort to persuade their customers.”

However, with most of the temporary phones coming from Samsung’s low-end lineup, such as the Galaxy J and A series and Galaxy Wide, the demand for the phones is unlikely to improve. The phones offered at the Samsung service centers, on the other hand, are Samsung’s premium phones such as the Galaxy Note 5 and the Galaxy S7.

There are roughly 430,000 units of the Galaxy Note 7s out in the Korean market.