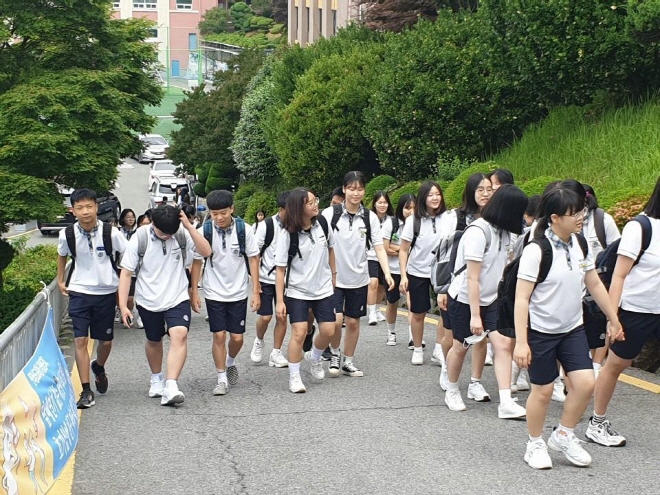 hools are now giving students options to choose from garments such as skirts, pants and shorts. (image: Jeollanamdo Office of Education)

This is due to efforts made by education authorities and schools to provide students with convenience and comfort.

In Gwangju, 71 out of 91 middle schools and 22 out of 62 high schools have changed the design of their school uniforms, introducing shorts in recent years, according to the Gwangju Metropolitan Office of Education and the Jeollanamdo Office of Education (JOE) on Wednesday.

In South Jeolla Province, 115 out of 248 middle schools and 42 out of 142 high schools had their uniforms altered.

Up until now, school uniforms have been universal in the form of white shirts, blouses and jackets.

Also, among the students, both female and male, tight and short school uniforms were popular.

Some analysts say that such trends were entrenched because of uniform advertisements using celebrities.

All the advertisements emphasized being “skinny and tall” by using famous celebrities and idols which stimulated students’ sentiment of imitation.

However, the trend has changed recently.

In the summer, shorts and short sleeved T-shirts have become popular, and hoodies and zip-up jumpers have gained popularity in the winter.

Schools are now giving students options to choose from garments such as skirts, pants and shorts.

Uniforms designed to strengthen elasticity and ventilation are gaining popularity among students in a hot summer weather.

In addition, uniforms designed to make up for cold weather in winter with an emphasis on attractive design and style are becoming students’ top preference.

An official at the JOE said, “In particular, female students are showing a positive response to new changes.”

The official added that “Current uniforms with extreme nicknames such as ‘modern corsets’ are changing to be more comfortable and efficient, which both parents and students are content with.”

On one hand, discussions on the liberalization of school uniforms, which gives students the option to wear school uniforms or everyday clothes, are also on the rise.

However, if left to self-regulation, students tend to prefer everyday clothes to school uniforms, which can result in expensive school uniforms being placed in closets or parents’ burden of buying clothes for their children.

Wolgok Middle School in Gwangju decided to allow students to choose whether to wear uniforms or regular clothes, after conducting a poll during parent-teacher public hearings last year.

However, the school decided to do away with uniforms completely starting this year.