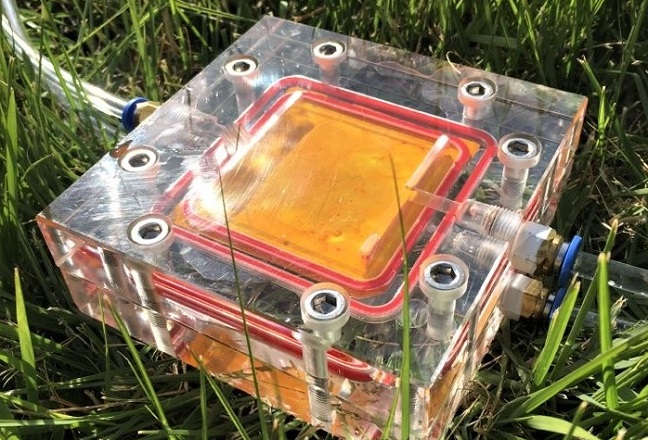 SEOUL, Nov. 11 (Korea Bizwire) — A South Korean research team has developed a high-efficiency photocatalytic membrane technology that can remove pollutants such as microorganisms that accumulate on the surface of water treatment membrane materials when exposed to sunlight.

The Korea Institute of Science & Technology (KIST) announced on Tuesday that it had developed a new membrane material that can automatically clean the contaminated surface of water treatment membrane using a photocatalyst that is activated when exposed to sunlight.

The water treatment membrane technology has been used for a variety of purposes, including the desalination of sea water and the purification of sewage water and running water.

However, filter performance deteriorates due to the growth of microorganisms on the surface of the membrane or the accumulation of organic dyestuffs therein.

The research team chemically bonded the photocatalytic material CPE that reacts to the visible light from the sun onto the surface of a PVDF water treatment membrane.

This led to the development of a high-efficiency photocatalytic water treatment membrane that is activated when exposed to sunlight and automatically removes all organic dyestuffs, heavy metals and microorganisms accumulated on the surface of the membrane.

After exposing the membrane used for high density polluted water to the sunlight for about an hour, 99.9 percent of bacteria such as high density colon bacillus and staphylococcus aureus and viruses such as bacteriophages that have been accumulated on the surface of the membrane were removed.

Thanks to the hydrophilic property of the photocatalyst that is chemically bonded to the membrane, the new material sustained the function of removing pollutants even after being tested more than 10 times, with the rate of water penetration remaining at a level higher than 97 percent.