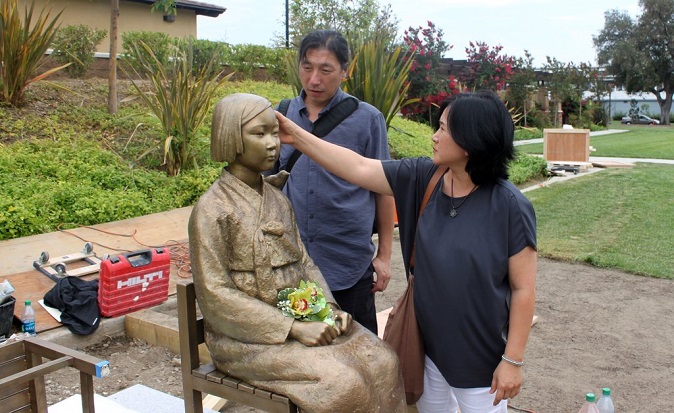 SEOUL, July 14 (Korea Bizwire) — A South Korean artist couple, who has built about 100 “comfort women” statues worldwide in memory of Korean victims of Japanese military wartime sexual slavery, condemned Tokyo on Wednesday for attempting to reverse history through the distortion of memory.

Sculptors Kim Eun-sung and Kim Seo-kyung said Japan has not repented for its war crimes and may be dreaming of another war considering its persistent efforts to obstruct the installation and exhibition of their statues.

In a written interview with Yonhap News Agency ahead of an exhibition in Munich, Germany, the couple said the desirable ideal that can be achieved through the installation of their statues is the “solidarity of peace.”

“We believe that the entire world must come together for peace and freedom of all and for the human rights of women and children,” the couple said in the interview.

Over the past decade, the couple has been making statues of teenage girls that symbolize Korean young women forced to work as Japanese military sex slaves, euphemistically called “comfort women.”

The first statue, formally called the “Statue of Peace,” was erected in front of the Japanese Embassy in downtown Seoul in 2011 to coincide with the 1,000th Wednesday rally of former Korean comfort women and their supporters.

The couple has since built 97 more comfort women statues — 81 in South Korea and 16 overseas.

The couple reflected on the meaning of their joint work in the interview while preparing to display another Statue of Peace at an exhibition in the German city.

“We feel as if our Statue of Peace has been brought to life thanks to the souls of the grandmothers and many peace-loving people,” the couple said, referring to the former comfort women.

“Setting up the Statue of Peace is a good opportunity to publicize the will of the grandmothers who are also peace activists and the desire of Koreans for peace.”

The couple said they have fought like “Korean independence fighters” during Japan’s 1910-1945 colonial rule of Korea to find locations outside of South Korea for the Statue of Peace due to many obstructions by Japan.

“We hope we all should bear in mind the words of our grandmothers that infringements of the human rights of women and children should never be repeated,” they said.

They also called for concerted action and prayer for all the people and children victimized by civil wars.