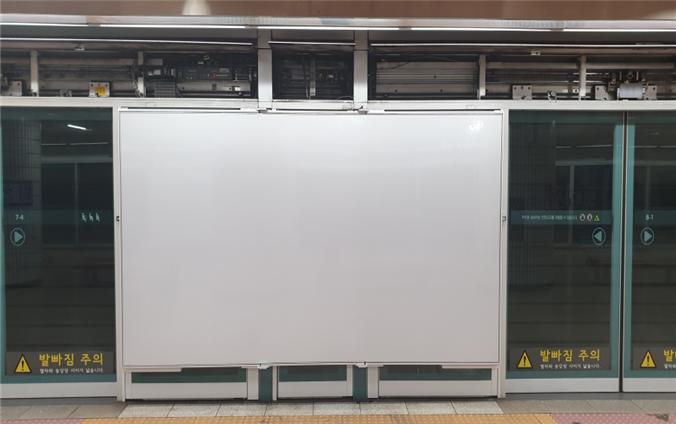 Seoul Metro has been working on replacing stationary safety doors with emergency doors that can actually be opened. (image: Seoul Metro)

SEOUL, July 3 (Korea Bizwire) — Advertisement boards installed at subway stations in Seoul will be replaced with new ones that can be folded into emergency doors.

Seoul Metro plans to remove 4,258 stationary safety doors currently in place in 132 subway stations on subway lines 1-8 and 1,987 advertisement boards attached on top of these doors to replace them with emergency doors and 1,499 foldable advertisement boards by the end of this year.

Seoul Metro, a public corporation of the Seoul Metropolitan Government in charge of operating subway lines 1-8 and part of Line 9, has been working on replacing stationary safety doors with emergency doors that can actually be opened up following a fatal accident at Guui Station in Seoul’s Gwangjin District.

In late May 2016, a 19-year-old maintenance worker was hit by a train while fixing screen doors on the station platform. The death was blamed on lack of safety awareness by subway operators who overlooked required regulations.

Thus far, the agency has replaced 71 percent of all stationary doors installed at 277 stations. There were no advertisement boards installed on top of these doors, which enabled the quick replacement.

Stationary doors with advertisement boards on top, however, were harder to take down because businesses that signed a contract with the agency to use the boards have been rejecting calls for early termination of the contract, fearful of sales losses. 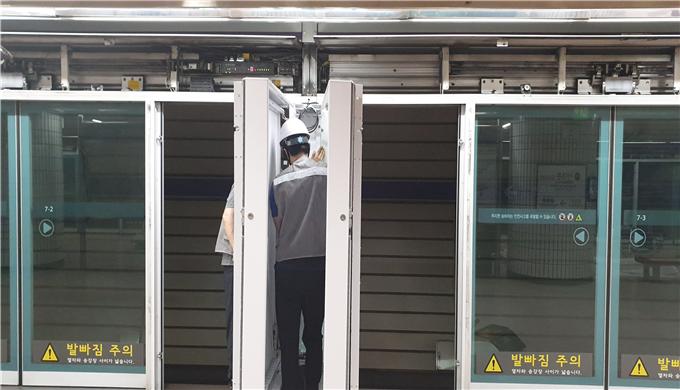 In response, the agency came up with the idea of permitting the use of the advertisement boards while enabling the doors to function in times of emergency.

Unlike other types of advertisement boards that slide or use other means to be opened, the foldable boards can be opened more quickly. They are also easily detachable, enabling speedy maintenance.

The new board comes in the same size as the stationary doors, and is made of fireproof fabric.