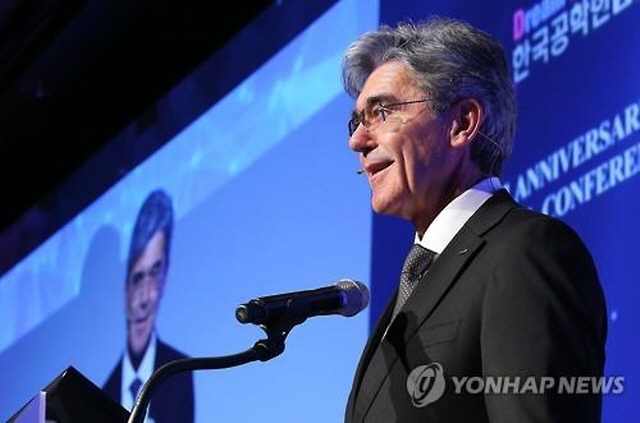 “Technological leadership has driven Korea’s and Germany’s economic success in the past,” Siemens CEO Joe Kaeser said in a forum in Seoul. “Both countries have a highly skilled workforce and powerful R&D ecosystems.

“Korea has world-leading ICT companies and excellent data infrastructures. Germany has a long tradition of cutting-edge manufacturing, a profound understanding of industry-specific processes,” Kaeser said, hinting the two countries can find a sense of common ground.’

Under the plan, the South Korean government also aims to bring digitalization to the country’s 10,000 factories by 2020.

“Siemens is ready. Ready for not just doing things our way. I am here in the country, which is more industrialized than Germany. Smartphones are the cornerstone of the digitalization,” Kaeser said.

“We at Siemens are committed to be on your side. You can count on us,” Kaeser said, highlighting South Korea’s creative economy vision to build 10,000 digitalized factories.

Kaeser said Germany’s Industrie 4.0 vision also is in line with the creative economy, where “the virtual world of IT merges with the real world of the shop floor.”

The company said it is currently contacting various local partners for the vision but fell short of providing further details on names and amounts.

Bringing digitalization to local manufacturing is not just for market behemoths like Samsung or Siemens but also for small and mid-sized players, Kaeser added.

Simens said South Korea shows strong potential, especially as it has proven success in the first phase of digitalization in the consumer segment.

“Leading smartphones and digital entertainment devices are made in South Korea,” Kaeser said. “There are 1,100 cellphones in the country for every 1,000 people.”

If successfully adopted, the Siemens head said, digitalization of the manufacturing segment will give industry players three key capabilities — speed, efficiency and flexibility.

The German businessman also highlighted the importance of security when it comes to digitalization, adding South Korean policymakers must take this factor into consideration.

Concerning German carmaker Volkswagen Group’s emission scandal, Kaeser said South Koreans can still count on Siemens, as it has been making efforts to maintain a sense of compliance.

“Volkswagen made a mistake as one company of many, many in Germany. They need to fix this and gain trust of customers,” he added.