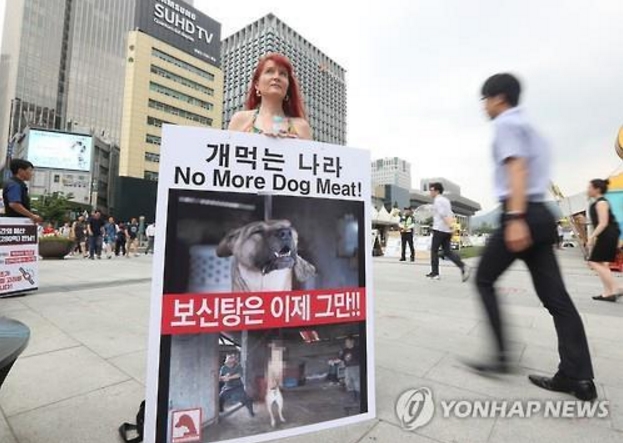 SEOUL, July 26 (Korea Bizwire) – Dog days, which refer to the three hottest days of the year in Korea, have been a controversial subject for quite some time. Animal rights advocates strongly oppose the idea of dog meat consumption and call it bizarre and disgusting, but some still look for rejuvenating or “stamina” food to withstand the scorching weather.

Two British women, Madeline Warren and Lucia Barber, were seen on July 25 protesting against Korean dog meat consumption in Gwanghwamun Square, claiming that they came to Korea to stop the brutal culture.

“We’ve seen too much footage of dogs being slaughtered in the most cruel and horribly gruesome ways. There is no scientific proof that consuming dog meat is actually beneficial for one’s health. It is very sad,” said Warren.

They pointed out that the biggest problem is how dogs are treated at the slaughterhouse. As it is a widespread belief that the quality of meat improves if dogs are beaten, poorly treated canines are often tortured.

However, Warren and Barber are very aware of the fact that their protest could be seen as an attack from western culture, and they took pains to point out that they love Korea and they did not come to fight against Koreans.

They also said that they are vegan (those who strictly refrain from consuming animal products and other animal-derived substances), and do not consume beef or pork.

The two women have also spearheaded a petition in the United Kingdom, raising the issue of the consumption of dog meat in South Korea. More than 100,000 people have already signed the petition.

“As seen in the petition, more and more people in western culture are becoming aware of Korean dog meat consumption. In civilized societies, humans do not eat all the animals out there. Just like we don’t consider dolphins and elephants as food resources, we are against the idea of eating dogs,” said Warren.

She added that some people in the U.K consider Korea as a dog-eating country, and they have a bad impression of the whole country and its culture.

Warren and Barber will be staying in Korea for three weeks, and plan to protest in Gwanghwamun Square and in front of the National Assembly. They also plan to visit animal shelters and see dogs that were rescued from illegal breeding factories