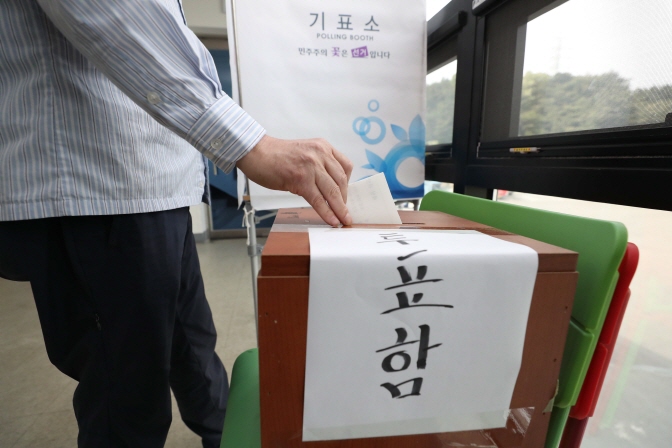 A bus driver casts a vote on a strike plan at a bus company in Daegu, southeast South Korea, on May 8, 2019. (Yonhap)

SEOUL, May 9 (Korea Bizwire) — Nationwide public transportation chaos is looming, as unionized bus drivers across the country have been voting overwhelmingly to strike to demand pay hikes and manpower increases in time for the implementation of a mandatory 52-hour workweek in the bus industry this summer.

Some 35,000 drivers from 10 cities and provinces have cast their votes between Tuesday and Thursday, with 96.6 percent pushing for a strike.

They are threatening to walk out, complaining that the 52-hour workweek, set to be enforced on bus companies with more than 300 employees from July, will lead to a significant reduction in their earnings.

The shorter workweek went into effect in July 2018 for companies with more than 300 employees but the bus industry was given a one-year grace period.

Beginning in July, the maximum weekly work hours of bus industry workers will be reduced from the current 68 to 52, forcing bus drivers to suffer an income reduction of over 1 million won (US$850) per month due to a cut in overtime pay.

Trade unions at the 247 bus companies in Seoul, Busan and 10 other regions across the country decided to hold a vote on whether to strike, after their employers refused to accept their demands for the compensation for anticipated income reductions and manpower increase.

The two remaining areas, Incheon and Changwon, are scheduled to have their votes on Friday.

The embattled bus companies have asked local and central governments for fare increases and other financial support, saying they cannot afford the rise in labor costs under the 52-hour workweek system.

In Busan, a southern port city, 97 percent of 5,387 unionized bus workers at 33 companies approved a strike in a vote held on Wednesday.

In Gwangju, Ulsan and South Chungcheong Province, the approval rates for a strike reached 95 percent, 87.7 percent and 95 percent, respectively. For South Jeolla Province, 87.3 percent of the unionized drivers who voted supported the strike.

In Gyeonggi Province, 96.2 percent of unionized drivers at eight of 15 long-distance bus companies, which provide vital transport services for Gyeonggi residents commuting to Seoul, endorsed the strike plan in a vote held from Tuesday to Wednesday.

Then on Thursday, the remaining seven companies held their votes with an average 99 percent approval rate for a strike.

If support for a strike prevails in the ongoing votes, labor and management are required by labor law to hold further negotiations under the arbitration of the labor relations commissions by Tuesday.

The trade unions then plan to launch their walkout on Wednesday if the negotiations fall through by the deadline.

All of the unionized bus drivers belong to the Korea Automobile & Transport Workers’ Federation (KATWF), which also includes bus mechanics among its members.

The KATWF plans to hold an emergency meeting Friday to decide whether to go on strike and other details.

The federation has asked the Moon government to take a more responsible stance on the bus industry labor dispute.

“Now is the time for the central government to act in order to achieve the multiple goals of reducing work hours, improving bus transport safety and creating more quality jobs,” an official at the KATWF said.