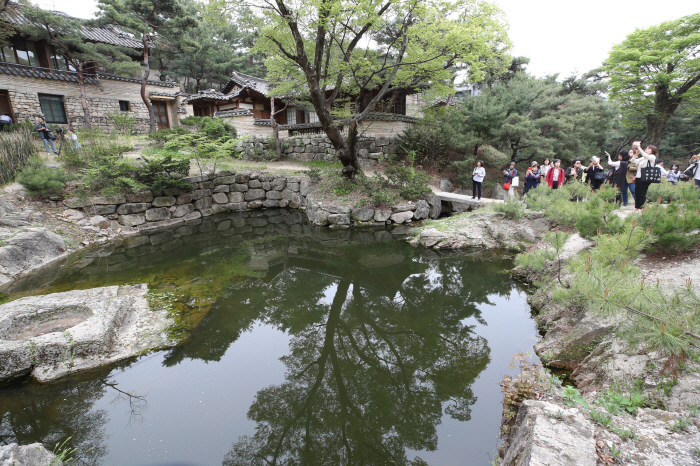 Visitors on a guided tour next to a rocky pond in the center of Seongnagwon, a typical traditional Korean garden in Seoul, on April 23, 2019. (Yonhap)

SEOUL, Apr. 24 (Korea Bizwire) – A set of blue-gray iron gates opens up to a quiet, pristine walled garden at the foot of Mount Bukhan, the sprawling mountain at the northern border of the metropolitan city.

The 16,000 square-meter garden in Seoul’s Seongbuk district became temporarily available for public viewing on Tuesday for the first time since it was created about 200 years ago.

Seongnagwon, meaning “a paradise outside the palatial city” in Korean, is arguably the only traditional Korean garden to survive the massive modern development drive that completely reshaped the face of Seoul during its breakneck growth period.

Often referred to as a “secret garden” for the very rare chance of it being revealed to the public eye, Seongnagwon managed to retain the original qualities of the traditional Korean garden style as ownership passed through private hands, including Joseon-era aristocrat Minister of Personnel Sim Sang-eung and a member of the last royal family of the Joseon Dynasty (1392-1910). Now officially designated a national “scenic site,” it is owned by a descendant of the Joseon aristocrat.

The first step into the garden, situated in a hilly housing area, opens on to a narrow pathway in what looks like natural wilderness. A tiny hill named “dragon’s head” blocking the leftward view draws attention to a small mountain stream on the right side, whose light gurgling sounds immediately transport a visitor from the busy city environment to a quiet retreat deep inside the mountains. 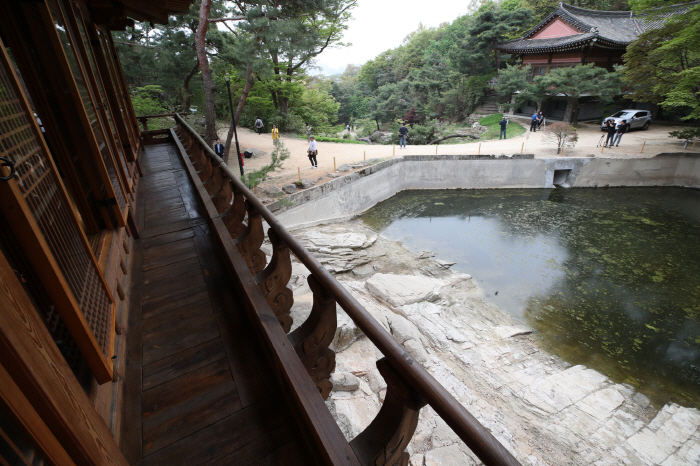 A brief walk along the pathway leads to a broad inner garden section, home to a rocky pond embellished with a majestic engraving by the celebrated Joseon calligraphist and scholar Kim Jeong-hui and a bucolic poem engraved by an unknown writer.

“The arrangements represent the traditional placement methodology, ‘one step, one scene,’ which allows one new thing to be savored every step (a visitor) takes,” he said, referring to the dragon’s head hill, artificially built to block the view to the inner garden at the point of entry.

Recognizing the value it holds to Korean heritage, the government added Seongnagwon to the state-designated list of cultural assets in 2008. Since then, a far-reaching restoration plan has been under way to fully revive the Joseon garden’s original qualities.

The ongoing recovery work, which is about 70 percent complete, meant there could be no pruning or other gardening work on the plot of land over the past several years as part of the ecological restoration. 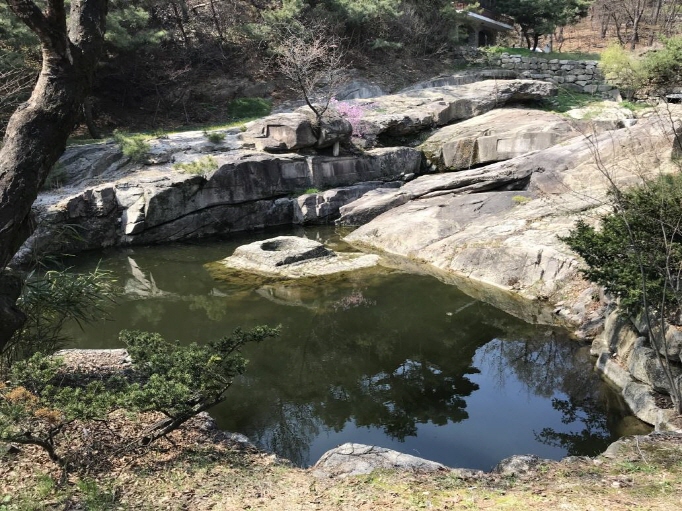 Even taking full consideration of the long absence of the human touch, the garden’s two rocky ponds, hilly trail and pristine forest, including what is believed to be a 300-year-old tree at the center of the garden, are redolent of a place deep within the mountains, rather than a man-made backyard.

“One of the major features of Korean gardens is the harmony between the natural and the artificial. But what is important is that artificiality never overpowers nature,” Park said.

“This embodies our view of nature and philosophy in which (people) tried to enjoy nature as it is, with only passive manipulation.”

This is where Korean aesthetics most widely differ from the famous traditions of China and Japan, according to the expert.

As if to prove that point, the center point of Seongnagwon was carefully positioned in such a way that Mount Nam in central Seoul reveals itself in full view to those who stand in the middle of the garden.

“Inside Korean houses and Korean gardens is the beauty that is already there in nature but is discovered with a discerning eye and diligence,” he said.

Next month, the Cultural Heritage Administration will come up with a final plan to carry out the remaining 30 percent of the restoration, which will involve the demolition of a house atop the hill at the back and the linking of the two ponds to bring the garden as close to its original design as possible.

From Tuesday to mid-June, the Korea Furniture Museum is opening the garden to the public for the first time, offering a rare chance to step into this long-preserved prototype of Korean traditional gardens and broader aesthetics.

Visitors are allowed guided tours of the garden in Korean as well as English in groups of no more than 20 members strictly on a reservation basis.

Safety is one of the reasons only a small group of visitors is let into the garden at one time, but it also reflects Seongnagwon’s original design motive: It should be a spiritual place to shed secular, everyday hassles and clamor to refine one’s mind.

The operator of the garden plans to fully open the garden up to the public after the renovation work is over.