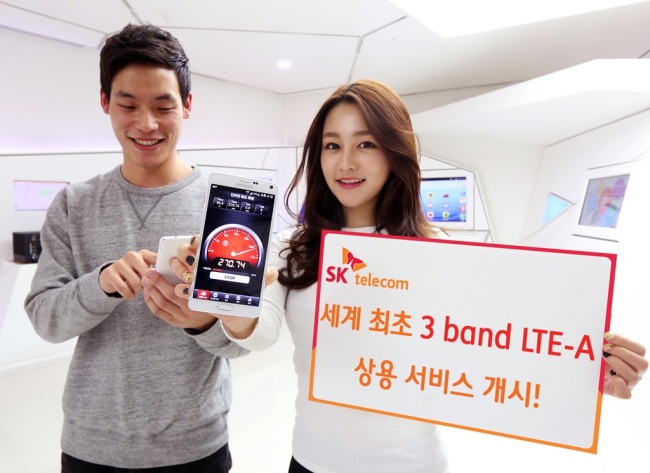 The service is four times faster than LTE and 21 times faster than 3G service. For instance, at its peak speed, tri-band LTE-A service allows users to download a 1GB movie in only 28 seconds. (image: SK Telecom)

On January 11, SK again announced that the Global Mobile Suppliers Association (GSA) recognized SK as the first tri-band LTE-A service provider by quoting its “Evolution to LTE Report.” The report said, “SK Telecom began constructing a LTE network with 2.1GHz bandwidth, and was the first in the world to commercialize tri-band LTE service on December 29.”

However, KT and LG Uplus see things differently, arguing that SK has not yet commercialized its network as it is still testing the service. Meanwhile, LG Uplus, which was the first carrier to successfully carry out a trial service of tri-band LTE-A service last June, argued that SK stole its “world first” title by using its market dominant influential power.

KT and LG filed a law suit against SK Telecom over its commercial advertisement using the “world first” title on January 12.

On the first day of the trial on January 19, KT and LG refuted SK’s argument supporting the first commercialization of the service bit by bit. KT said, “The devices for the service were distributed for the pilot test and the number was limited to 100. Samsung Electronics supplied test devices to both SK and KT at the same time. As they were in a testing phase, it should not be regarded as ‘commercial’ service.”

LG Uplus said, “The technology should aggregate three different signals and check the collision between the existing LTE network and LTE-A network prior to its commercialization. Only our technology confirmed that there is no collision, SK’s argument is not based on fact.”

“Without developing the technology, SK Telecom received the tri-band LTE-A devices thanks to its market dominant power with more than 50 percent of market share,” it added.

The court will rule on the case after verifying provisioning documents from Samsung Electronics to SK Telecom and KT, contract sheets with 100 subscribers using the devices, and actual returns of the devices. The next court date will be set after the related documents, which are due on January 22, are received.