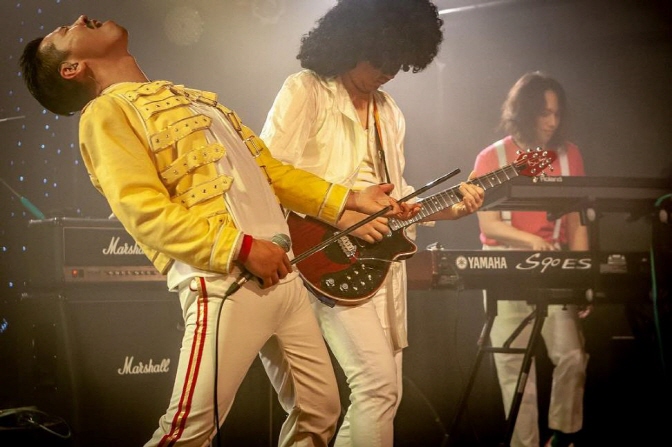 The 0vueen Band, a 20-year old South Korean band formed as a tribute to Queen, played to a packed house at the 27th memorial concert for Freddie Mercury held on November 24. (image: 0vueen Band)

SEOUL, Dec. 5 (Korea Bizwire) — Kim Young-dae, an employee at a small entertainment company, was with his colleagues spending time at a noraebang, a Korean karaoke establishment.

As his last song, he sang Queen’s ‘We Are the Champions’.

“Ever since I watched the movie Bohemian Rhapsody, I went through YouTube looking for all Queen-related videos,” said Kim.

“I chose this song because a popular South Korean singer once said on the radio that the song used to be sung at restaurants or pubs in England to call it a day, and now my colleagues in their 20s are singing the song with me.”

“Bohemian Rhapsody”, a movie that talks about the life of Freddie Mercury and Queen, is leaving a strong impact on the lives of many South Koreans.

Social networks are filled with posts about Queen and their music, regardless of the generation.

The movie became the most popular music film in South Korea after attracting more than 6 million spectators, many of whom watched the movie multiple times via singalongs and other special screenings.

What is more significant is that the movie has revitalized pop music in South Korea, which has been suffering from a prolonged depression since the 2000s.

After MBC, a South Korean broadcasting company, re-aired Queen’s 1985 Live Aid concert on Sunday, many viewers have been making requests to air the show one more time.

Shin Hae-chul, the late South Korean singer-songwriter and record producer, once talked about Queen on a radio show. He said that Queen was “a band that anybody would know, but not everybody would know.”

Queen is a sweet memory for those in their 40s and 50s who grew up buying LPs and cassette tapes of the famous band.

The younger generation in their 20s and 30s also grew familiar with Queen as they were exposed to the band’s music in various commercials, football matches and other sports events.

However, the life of Freddie Mercury as a racial, sexual minority has been something that many Queen enthusiasts have turned a blind eye to, and that is why Brian Singer’s 134-minute movie about Freddie Mercury is so special.

“We were chilled when Freddie Mercury, once scorned for being a Pakistani, became this legendary star who sang along with his fans at Wembley Stadium,” said a couple in their thirties at a movie theater.

Queen Syndrome is going beyond the screens to sweep through social networks, spreading like wildfire throughout the broadcasting, music, and entertainment sectors.

The song ‘Bohemian Rhapsod’ topped the charts, and album sales are up exponentially.

“More than 20,000 copies of the movie’s official soundtrack have been sold via Aladdin and Yes24,” said a source from Universal Music.

“In addition, combo sets that included popcorn with the soundtrack are selling out at CGV, Megabox, and other movie theaters.”

“Queen’s ‘Greatest Hits’, a three CD set, used to be sold in the hundreds each month. Last month, however, thousands of copies of the compilation we’re sold. Official Queen T-shirts are also back in production.”

Queen’s music is also being heard outside of the movie theater.

The 0vueen Band, a 20-year old South Korean band formed as a tribute to Queen, played to a packed house at the 27th memorial concert for Freddie Mercury held on November 24.

“There are a lot of people asking for songs by Queen,” said the owner of an LP Bar in Seoul. “Customers in their 20s and 30s come to listen to Queen’s music in its most authentic form.”

“Bohemian Rhapsody” has become popular among Koreans of all ages.

More than 8 percent of all spectators returned to watch the movie multiple times, surpassing the average rate of 3.2 percent among the top ten movies currently being screened.

“It’s a legendary epic. That is why this movie has been so successful,” said Kim Yun-ha, a movie critic. “Queen’s music and the performance appeal perfectly to South Koreans.”

This is also the case for younger South Koreans. According to Kim, the idea that Freddie Mercury aims to sell through his magical performance is also what today’s music wants to achieve.

For outsiders, songs like ‘We Will Rock You’ or ‘We Are the Champions’ are cheering songs. In the movie, Freddie Mercury introduces Queen to EMI, a major record company, as “misfits playing for the misfits.”

“I’ve listened to Queen since I was in middle school, but even now their songs give me the chills,” said Shin Dae-chul, leader and guitarist of Sinawi, one of the first heavy metal bands in South Korea.

“Queen’s musical composition is truly revolutionary. A mixture of acapella, ballad, hard rock, and even opera is what makes their songs so genius. On top of that, their precision and vocal harmonies bring me to the point of reverence for such a legendary band.”