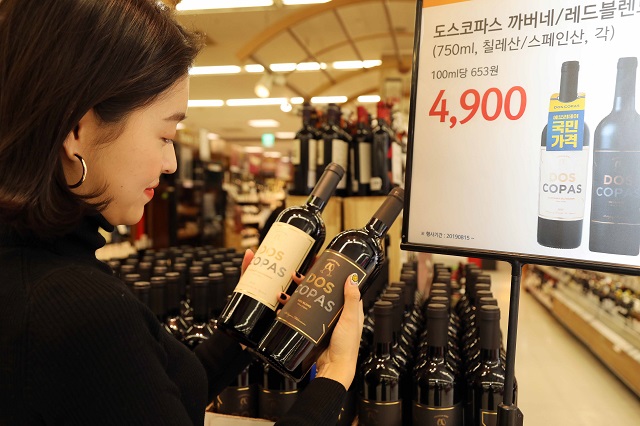 SEOUL, Jan. 8 (Korea Bizwire) — South Korean retail industry is paying attention to wine to somehow attract consumers who are engrossed with their smartphones to brick-and-mortar stores.

Wine consumption has been on a steady rise for years. Moreover, selling alcoholic beverages online is illegal in South Korea.

In response, the industry is using a strategy to put out cheaper and tastier wines and to entice customers to come to stores if they want to buy them.

E-Mart, the country’s leading discount chain operator, is at the forefront of this initiative.

In August of last year, the company started selling Dos Copas Cabernet Sauvignon for 4,900 won (US$4.16) as its flagship product, pushing ahead with its ultra-low-price strategy, and sold about 1.07 million bottles within four months.

Moreover, according to its own analysis, 55 percent of wine buyers were new customers who had never purchased wine from E-Mart in the past six months.

In February of last year, E-Mart 24 created liquor-specific branches and sold some 80 wines at one store.

At the same time, the company also launched an online-to-offline (O2O) service, where customers can select wine through a mobile app and receive it from the store of their choice.

“It is the best promotional activity in itself to have customers to take a look around the store when they come to pick up the wine,” said an industry official.