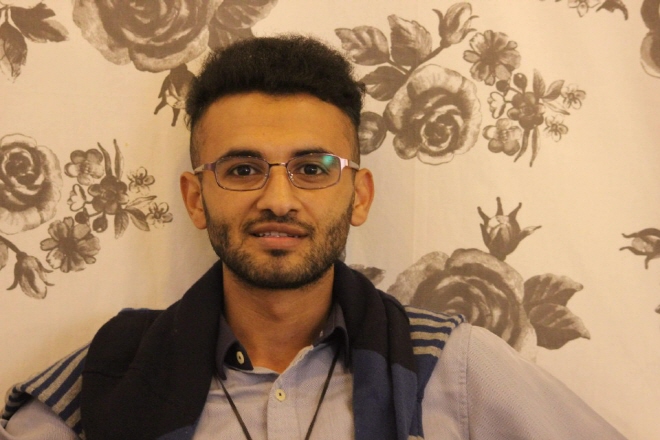 Esmail Alqublani poses in this photo provided by him. (Yonhap)

JEJU ISLAND, Oct. 26 (Korea Bizwire) — Nearly two years after Esmail Alqublani escaped from a war-ravaged Yemen, his memories of plundering, bombings, kidnappings and slayings by armed rebels in the central city of Ibb are still haunting him.

The 30-year-old former journalist can hardly imagine a return to the scene of the grinding conflict cited as the world’s worst humanitarian crisis — a reason why he has been desperately seeking refugee status in Korea since his arrival on the southern island of Jeju in May.

“Every single thing in my whole life has been asking me to leave (Yemen) to survive, because if I stay there, I will fight (the rebels), be stuck with them or they will kill me,” Alqublani said during a recent interview with Yonhap News Agency on Jeju.

“(The rebel group) is what made me escape from my city, from my house, from my life, from everything,” he added, expressing deep sadness about his separation from his mother and younger brother still in the Arab country.

Alqublani was referring to the Iranian-backed Shiite Houthi militia that has staged a brutal campaign to stifle dissent. Since March 2015, it has been fighting the Saudi-led military coalition aimed at restoring Yemen’s internationally recognized government.

Civilians like Alqublani have borne the full brunt of a conflict that has devastated homes, businesses, schools, hospitals and other infrastructure, worsened food insecurity and triggered sharp increases in the prices of basic commodities.

Between the start of the war and early August this year, the United Nations has documented 17,062 civilian casualties in Yemen, including 6,592 dead and 10,470 injured. Observers say that the actual death toll may far exceed that estimate.

Alqublani was in the Houthi rebels’ crosshairs, as he was striving to shed light on the atrocities they have committed in his neighborhood, once a safe haven for refugees from other war-torn villages.

Alqublani was among 561 Yemeni people who arrived on Jeju this year, mostly via Malaysia, which offers a 90-day visa-free stay. Jeju allows foreign travelers, except for those from some countries, to stay for up to 30 days without visas under a waiver program aimed at boosting tourism.

Last week, Seoul’s justice ministry gave 339 Yemenis on Jeju renewable one-year humanitarian visas in a decision that has frustrated many in pursuit of a stable legal status in Korea. The authorities are reviewing the qualifications of 85 others.

Alqublani appears to be among the 85 others as he has yet to be notified of the result of his refugee application. 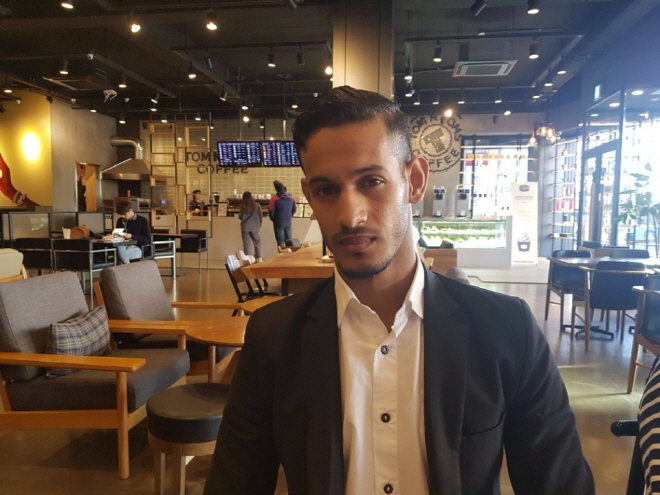 Ahmed Askar, a 28-year-old Yemeni kick boxer, speaks during an interview with Yonhap News Agency on the southern island of Jeju on Oct. 24, 2018. (Yonhap)

Ahmed Askar, a 28-year-old Yemeni kick boxer, has received a humanitarian visa, though he has sought the legal refugee status that will help him bring in his family here. But he is not too disappointed, as he can still pursue his dream of becoming the “world’s best” fighter with the help of South Korean supporters.

“For me, I am okay (with the humanitarian visa) because I have wanted to live in a place where I can find peace … because in my country, (there has been) no peace … never,” he said.

“I want to find a good life here and a good future. … I wanted to pursue my dream in any country, but all countries have closed their doors for Yemeni people. However, only Jeju opened to me,” he added.

In his home city of Hajjah, northern Yemen, Askar received constant calls from the Houthis to fight for them in the war. But he rejected them as he did not want to engage in any conflict against his own countrymen.

“The Houthis wanted to kill me because I didn’t go to war with them … because I am just an athlete, not a soldier,” he said. “If the war does not stop in my country, we don’t know where we go.”

Since he arrived on Jeju five months ago, Askar has been surrounded by many supporters, including his Korean coach. But he is still sad about being unable to reunite with his family — especially his father, who has been in bed after a stroke last year.

Askar is not a complete stranger to Korea. He visited Incheon, just west of Seoul, in 2013 to attend the Asian Indoor and Martial Arts Games. 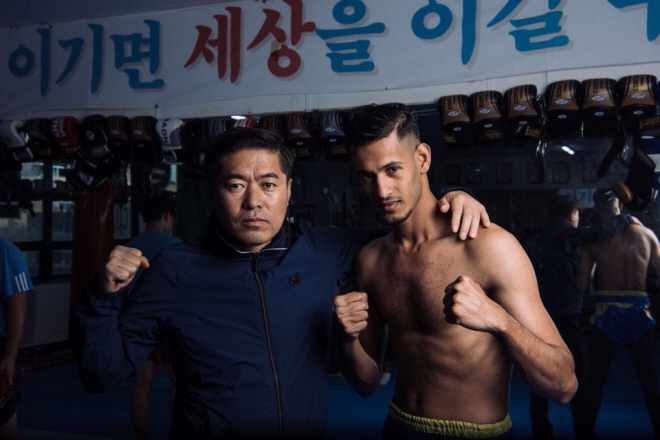 Ahmed Askar, a 28-year-old Yemeni kick boxer, poses with his Korean coach in this photo provided by him. (Yonhap)

Along with the civil war, deepening sectarian division is another major reason Yemenis are seeking asylum.

Sheba (an alias), a 31-year-old refugee applicant on Jeju, said he left Yemen in 2014 after he felt mistreated by those who hated his father’s unique brand of religion, which has been under constant attack from other Muslim sects.

“I hate all Muslim religions … they hate my father’s religion. I hate them,” he said, noting that the fact that he has left the Muslim religious community would expose him to some form of unbearable persecution — a reason why he cannot return home.

Sheba described Korea as a “paradise” where there is a religious freedom.

“When I arrived (in May), I smelled the weather. It was so different. It was other feelings (that I have never had) from all of my life. I thought this is my real country,” he said. “I started to feel I am a human.”

But the humanitarian visa he received last week was a source of deep concern, he said.

The Seoul government’s decision to grant humanitarian visas to 339 Yemenis has sparked an intense debate here. Some took it as a sign that Korea is willing to embrace refugees albeit temporarily, while naysayers have raised concerns about potential social problems that refugees could cause.

The U.N. High Commission for Refugees (UNHCR) commended Seoul’s demonstration of its commitment as a signatory to the Refugee Convention, but called on it to enhance its humanitarian system.

“We do hope, however, that Korea’s humanitarian system could be enhanced so that the holders of this status have more stable legal status, work rights and better support for local integration,” its public information official Heinn Shin told Yonhap.

“We call for the immediate deportation of fake Yemeni refugees,” a conservative civic group said in a recent statement, “The government should explain the reason if it cannot deport them and it should place those on humanitarian visas in a foreigner protection center right away.” 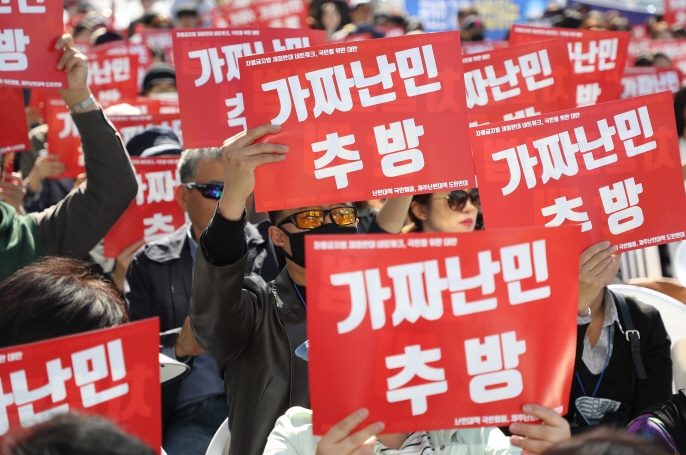 Protesters calling for the deportation of what they call fake refugees during their rally in central Seoul on Oct. 20. (Yonhap)

Observers said that such a response reflects the undercurrents of Koreans’ unease about the sudden influx of foreigners, particularly when they recoil from the negative image of the havoc wrought by religious extremists and radicals in the Middle East.

This is part of the reason Askar hesitates to reveal the country of his origin — a land that has long been the site of sectarian conflict.

Ahmed Al Dram, a 37-year-old Yemeni on a master’s degree course at Seoul’s Hanyang University, raised the prospect of the young refugees serving as a bridge for future win-win economic cooperation between Korea and Yemen. He has been supporting the refugee applicants on Jeju.

“Yemen is a very strategic place for logistics and marketing. Yemen is a good local market in the Gulf area and for Africa and Europe. It will be a very huge chance for them to extend Korean industries, such as electronics cars, green energy and services,” he added.

Al Dram also voiced hope that the media will focus more on their urgent humanitarian needs rather than highlighting the rumors about alleged links to terrorist organizations or other negative aspects.