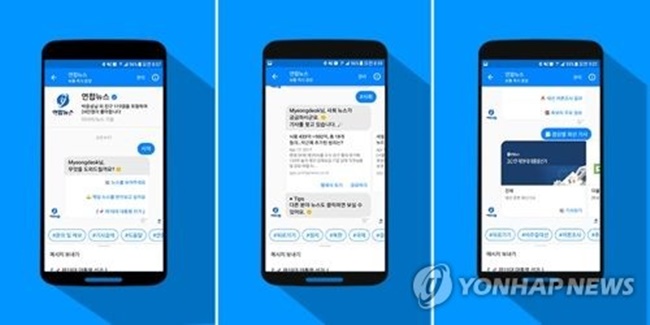 In the new service offered in Korean, any Facebook user can send messages to Yonhap’s chatbot via Yonhap’s official Facebook page (fb.com/yonhap) and is provided with the latest customized news content.

Chatbot has been spreading to various service industry sectors since Facebook opened its Messenger platform last year, allowing media publishers, retailers and other companies to develop chatbots that offer their services to Facebook users.

It is the first time that a South Korean news organization has launched a chatbot service. CNN, Wall Street Journal, Washington Post and other major foreign news outlets have recently introduced Facebook news chatbots but the commercialization of a Korean-language chatbot news service has been delayed due to language and technical limitations.

Smartphone users can freely communicate with Yonhap News Agency’s chatbot anywhere and anytime only after installing the Facebook Messenger app.

In the first stage, Yonhap’s chatbot service will offer the latest news on the May 9 presidential election and other major events, as well as news search service, in a real-time chat.

If Facebook users enter messages, like “Give me top news” or “Want to read sports news,” they are immediately given related news content in the chat room. Requests for real-time news on presidential candidates and political parties are also possible.

In case of a request for a regular subscription, users will be able to receive Yonhap’s selected news digests at a given time everyday. Besides messages, users can also obtain information by clicking key word menus.

Yonhap said it will continue to upgrade the functions of its chatbot service in a reader-friendly way.