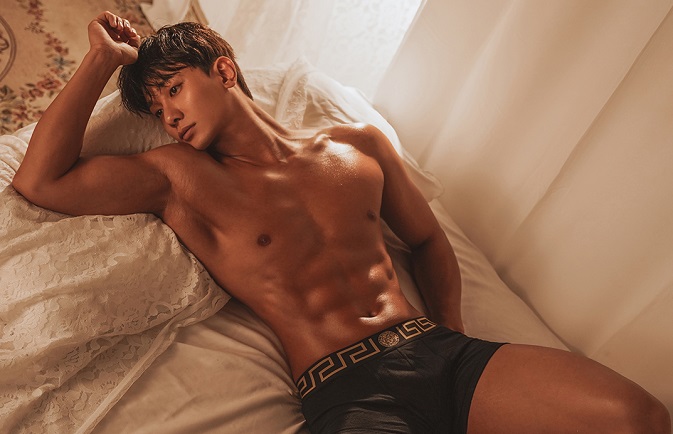 SEOUL, Aug. 28 (Korea Bizwire) — About a year into the COVID-19 pandemic, Park Hyun-seok took a look at himself in the mirror and was disgusted by what he saw.

Standing in front of him was a version of himself that was at least 10 kilograms heavier than before, which left him feeling ugly, lazy and ashamed.

The 30-year-old businessman from Seoul immediately booked an appointment for a photo shoot of himself three months later and got to work building the body he would be proud to look back on years, and certainly decades, from now.

“I wanted to know what it would be like to live in the best-looking body I could have in my lifetime,” Park said.

And the pictures, which were shot as scheduled on Aug. 13, prove he found out.

Park is one of many young South Koreans — mostly in their 20s and 30s — who embark on a monthslong journey to discover their true physical potential through grueling exercise routines and a prohibitive diet.

It is a journey laden with emotional and psychological pitfalls, but if followed properly, the results can be rewarding for both the mind and the body, according to Park and others who rave about the experience.

“I feel healthier. My clothes look better on me. I feel more confident. And people tell me I look great and give me positive feedback,” Park said.

The desire to be fit is not new, and personal trainers have been around for years to help people hit their target weights or figures.

But whereas professional body photo shoots were once reserved for trainers and celebrities, their popularity has grown sharply among the general public over the last seven to eight years, according to Kim Jeong-taek, who runs M-Class Studio, a photo studio in Seoul that specializes in “body profiles,” the Korean term for such pictures.

“I would say we’re at the peak (of popularity) now,” Kim said.

“The pandemic has definitely played a role, because in its early days, people were reluctant to go to gyms, and the government imposed various restrictions on the facilities. Now, the restrictions have been relaxed a little, and people are flooding back in. Gyms are packed.”

In his experience, Kim said body profiles were most in demand in the summer months — when people build “summer bodies” — and in November and December.

“Why at the end of the year? You’d be surprised by the number of people who want to mark the end of their 20s or 30s (with a body profile),” he said. 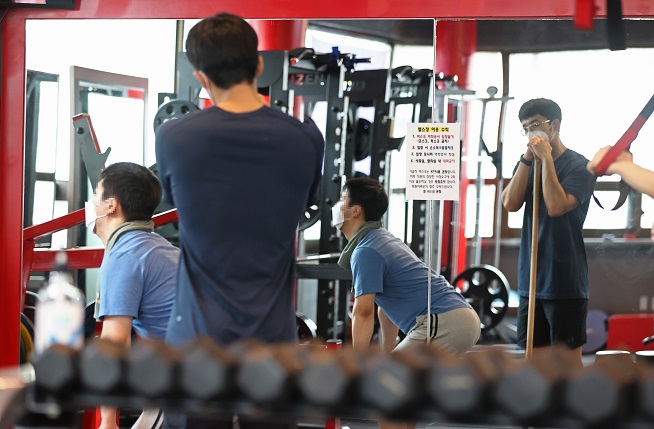 Age was certainly a factor for Yoo, a 28-year-old IT project manager in Seongnam, just south of Seoul, who asked to be identified only by her surname.

While shooting a body profile had been on her bucket list since she was 20, this year she decided it was time to try it as, under the Korean age system, she turned 30.

“I wanted to find new motivation for my life. I wanted to push myself and find inspiration,” she said.

Like Park, Yoo started making preparations in the spring by browsing photo studios and signing up for personal training classes. Some studios were so popular they were fully booked for six months.

Still, she managed to find one that could accommodate her on July 2, and for the four months that remained, her daily routine consisted of work, gym and running in the park.

Every day, she exercised for two hours after work while surviving on a diet of mostly chicken breast, proteins and salad.

“The worst part was that I was already stressed at work, and as a woman I went through monthly hormonal cycles that left me feeling really lethargic,” Yoo said.

“I’m the type that releases stress by eating, but because I couldn’t do that, I was highly stressed and for the first time I could understand why people watch ‘mukbang,’” she said, referring to the popular Korean entertainment of posting and watching videos online of people gorging themselves on large amounts of food.

Yoo said her biggest source of emotional support was her personal trainer, who not only instructed her on what to eat and how to train, but also routinely checked in with her to monitor her mood and physical well-being.

Another thing that helped her stay on course was the fact that she had made a large financial investment.

Personal training classes cost 2 million won for 40 sessions, tanning over a two-month period cost 500,000 won, her outfit cost between 100,000 and 150,000 won and her special diet cost a considerable amount, too.

Park, the businessman, said he spent similar amounts on all of those expenses, excluding the outfit, and added 200,000 won for waxing. 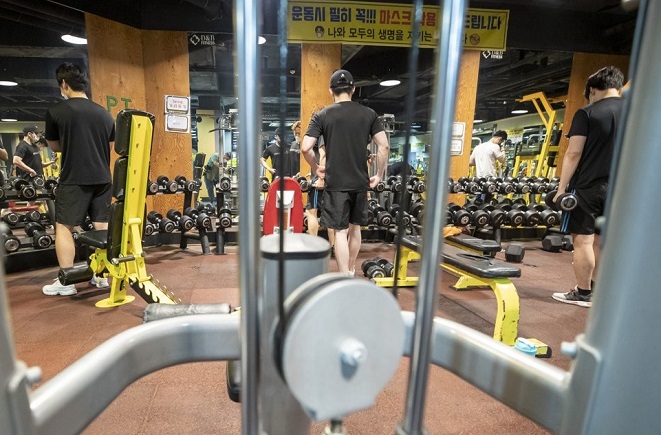 People work out at a gym in Seoul’s Mapo Ward on June 13, 2021. The ward office launched a pilot project of extending business hours of indoor gyms until midnight. (Yonhap)

Kwak Keum-joo, a psychology professor at Seoul National University, said she views the growing popularity of body profiles as a positive trend if, like all things, they are done in moderation.

“Young people are under a lot of stress because it’s hard to get a job and the pandemic has taken away opportunities to meet people,” she said.

“But by taking time for self-improvement and sharing their experiences on social media, they have found ways to have a dialogue and created a space for communication.”

On Instagram, a search for the hashtag “body profile” turns up more than 2.3 million posts, demonstrating the high level of interest in the trend.

Kwak cautioned against letting the urge to “show off” become an obsession, saying it could lead to social media addiction.

Kim Min-ji, a family medicine doctor at Soonchunhyang University Hospital, also warned of the health risks of losing weight and building muscle over a short period of time, saying people should take at least six months to train and prepare for a body profile.

“People often gain back all the weight they lost if they do it in one or two months and can suffer from eating disorders because they don’t consume a balanced diet,” she said.

Low food intake and sudden weight loss can sometimes result in irregular periods in women and be especially harmful for people with diabetes or high blood pressure, she added.

Videos of people complaining of side effects from drastically cutting back on food before a body profile are not hard to find on YouTube.

“I regret shooting a body profile,” a YouTuber named Somzzi said in a video uploaded in April, describing her struggles with overeating since taking the pictures.

“I thought I would become liberated from dieting, but in fact I became trapped by it,” she said. “I now weigh more than I did before I started dieting.”