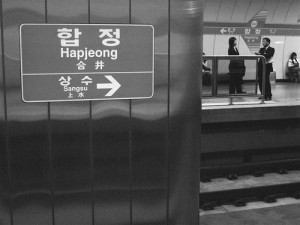 Confusing signs for tourists and foreigners in Seoul are being corrected thorugh a campaign. (Image: one-11@flikr)

SEOUL, Korea, Dec 10 (Korea Bizwire) – Walking or driving across Seoul, you can easily spot a sign with foreign language transcriptions that is misspelled, misleading or plain awkward. If you do spot such signs, next time perhaps you should consider reporting them to the City for it to modify them because it is having a campaign to correct those signs and giving out prizes to some of those that make reports.“Han River” used to be written as “Hangang” on the direction signs in Seoul, which meant less than nothing to a foreigner who does not know the meaning of the word “gang” in Korean. Now the proper transcription is “Hangang(River)”.

The campaign will be held from December 11 to January 28 next year for 50 days. The tourists and foreigners residing in Seoul can participate in the campaign through the English, Chinese or Japanese pages at “http://www.visitseoul.net“, and the citizens of Seoul can also do so by logging onto “http://wow.seoul.go.kr” from personal computers. Once such report is made, the subject sign is verified by an advising committee, and the committee decides whether to order the local jurisdiction to correct it.

This is not the first time the city of Seoul is making such efforts. Earlier this year, it received 500 reports from locals and foreigners through another campaign. The city is presenting rewards to those with a great number of report cases or important cases and is also drawing a lot to pick recipients of the rewards. The participants can use the Website, “dictionary.seoul.go.kr”, to see if a transcription in question is appropriate or not.

Mr. Ki-hyun Kim, a head chief at Ministry of Public Administration and Security, said one of the most frequently-met difficulties foreign tourists faced when visiting Korea was the confusion from the direction signs. He added that Seoul would continue to accommodate the tourists by reforming the signs and asked for the active participation of the citizens.