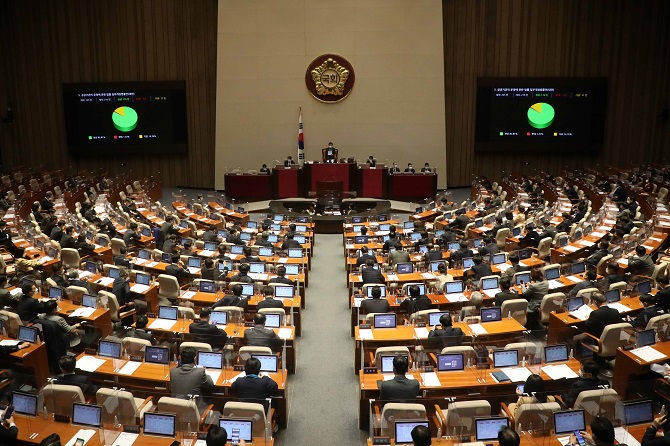 Lawmakers vote on a bill regarding union representation in public institutions’ boards at a plenary session of the National Assembly on Jan. 11, 2022. (Pool photo) (Yonhap)

SEOUL, Jan. 11 (Korea Bizwire) – The National Assembly on Tuesday passed a bill that mandates a union representative be included on public institutions’ boards of directors.

The lawmakers approved a bill during a plenary session that dictates public firms and quasi-public institutions must appoint one nonexecutive director recommended or picked by the head of a labor union on their boards.

More than 130 public institutions will be subject to the new regulation.

The director, representing the labor union, will have a two-year term that can be extended for another year.

The bill, which was designed to improve the transparency of management in public firms, will be enforced six months after its promulgation.

The Assembly also passed a bill on lowering the age of eligibility for joining political parties to 16 from the current 18.

The revision to the political parties act will allow people aged 16 to participate in the process of creating a political party and become a party member.

It follows the passage of a bill on lowering the age of candidacy for parliamentary and local elections to 18 from 25 last month.

Other bills passed at the plenary session include a revision to the election law that enables the government to set up extra overseas polling stations in regions where the population of overseas Koreans is more than 30,000.

Lawmakers also passed a special law on supporting the country’s advanced strategic industries, such as semiconductors, and a revision to the balanced national development act that gives more freedom to municipal governments’ development plans.