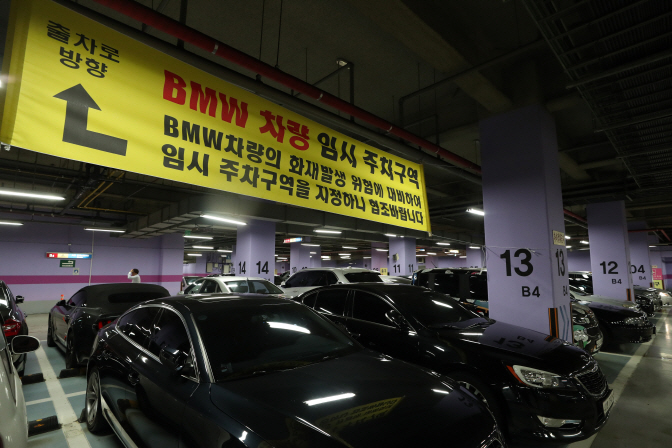 SEOUL, Aug. 8 (Korea Bizwire) — “When someone in a BMW pulls in, we ask that they park in the designated parking area on the B4 basement level. Of course, 99 percent of drivers get mad when we say this, and claim that their car is new and without any problems. That troubles us,” said a security guard who works at a large office building in central Seoul’s Jongno neighborhood.

“BMW drivers are very unhappy that they are being singled out,” added the security guard.

With the German carmaker scrambling to respond to a series of engine fires, large buildings, hospitals and other venues throughout the city have been refusing to allow access to BMW vehicles.

The reports of BMW vehicles going up in flames have become so frequent that one can hardly blame the general public for feeling a bit antsy about finding themselves or their car next a potential fire hazard.

A large hospital in Seoul’s Seocho-gu district put up a sign recently asking drivers of BMW’s 520d to park in a separate area made available on the first floor.

Citizens United for Consumer Sovereignty, a non-governmental organization, released a statement that said that “the software of the vehicles may be problematic if car models produced in 2011 and 2012 continue to catch on fire.”

The civic group has called for an investigation team composed of third-party professionals to determine the exact cause of the fires.

The group also pressed the government to take stronger measures.

“If the government and BMW do not take the matter seriously, we will be filing a criminal lawsuit against the company and call for a boycott of BMW cars,” said Citizens United for Consumer Sovereignty.