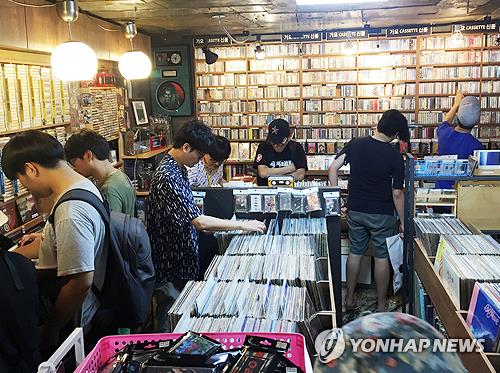 SEOUL, Sept. 27 (Korea Bizwire) — For fans of rock and heavy metal music, a visit to Dope Records, an independent record store run by Kim Yun-jung in Mapo, western Seoul, evokes a strange feeling. The dim-lit basement shop feels as if time has rewound back to the mid-90s — almost three quarters of the 82-square-meter store is covered wall-to-wall by a huge collection of rock music cassette tapes.

With a backlog of around 15,000 tapes (50,000 when including ones in storage), predominantly Western rock, pop music and also classic Korean albums, the store is undoubtedly a treasure trove for those with fond memories of using a Walkman during the 1980s to the late 1990s, when the medium started to phase out. But in the digital age, Dope Records, at first glance, seemed almost suicidal from a business perspective.

“I’ve been in music retail since 2001 and what I’ve learned, despite the extinction of cassettes, is that there always has been a small but ardent demand for tapes. As with vinyl, music geeks are starting to see value in cassette tapes, for both listening and collecting,” Kim, 42, said.

Kim is one of the small but steadily growing number of South Korean music listeners who refuse to allow the cassette to rest in the proverbial graveyard of bygone technologies. They see a particular value in cassette tapes, once the dominant music delivery format that boomed with the rise of portable tape players but now has become relegated to junk status in the eyes of average people.

To be clear, Dope Records isn’t getting its supply from music labels or through traditional retail means. Synnara Record, South Korea’s largest music retail chain, discarded all of its tape inventory a few years ago amid flatlined sales. Most major labels have also halted tape production for quite some time, though a number of small trot music companies, such as Applemusic and Four Season Music Power, maintain production of trot music cassettes mostly for the niche senior market.

As for Kim, he traveled around the country for years, scavenging local mom and pop record shops about to go bust — to acquire the remaining cassettes that would otherwise be thrown away.

Kim said he was frequently asked by perplexed shop owners, “Why are you buying these?” 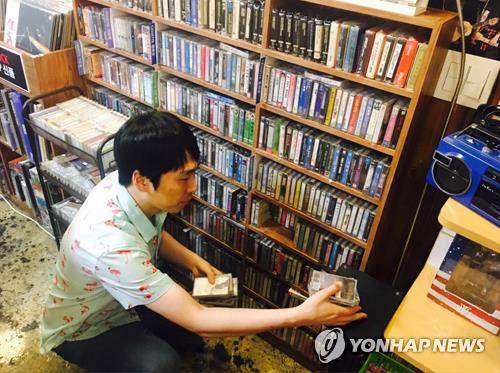 Interestingly enough, tapes have seen a small-yet-significant bump in sales in the United States where they are still being produced in limited volume. According to Billboard, 129,000 tapes were sold in 2016, jumping 74 percent on-year. Though nowhere near sales of CDs and vinyl, it is an indicator that some fans are willing to spend money on tapes, according to Kim.

“I think the interest in cassettes today was rekindled when the original soundtrack for the Hollywood movie ‘Guardians of the Galaxy’ came out in a cassette format a few years ago, resembling a mix tape of different singers which almost all of us have experience with in the past,” he said.

Kim isn’t alone when it comes to sharing his passion for cassettes. People Who Listen to Cassette Tapes, a community of tape aficionados on Naver, was formed in October of last year, with its membership reaching over 1,700. With over 9,000 posts, the community is active in sharing information on where to buy tapes and how to fix discontinued tape decks and portable audio cassette players.

For Kwak Jae-ho, 38, often he has no choice but to listen to tapes that he already owns. Due to unsettled copyright negotiations, there are music that listeners can’t access on digital streaming services, such as Melon or Apple Music. This is more of the case for niche artists, he said.

“I’m a fan of the mid-90s jazz band Daisy and the group’s song ‘My Little Bird.’ I can search for the band on Melon but can’t play the music, which just defeats the purpose of having an all-you-can-listen digital music service,” said Kwak.

Listening to music on tapes, as opposed to CDs and digital streaming, also resonates emotionally deeper, said Kwak: “When listening to tapes at home recently, I heard the clicking sound of the cassette deck doing an auto reverse. It felt like I was going back to the past. Music to me isn’t just a collection of songs. Its ingrained into my past and my memories.”

The record industry, including major labels, is apparently taking note of this trend, releasing tapes albeit in limited terms and mostly as collectors’ merchandise.

There’s also another group of people who buy tapes and for their own reasons: seniors having difficulty with the changing times. Downloading and subscribing to digital music services on smartphones may be a walk in the park for the majority of today’s younger generation, but it’s not the case for many elders.

“I’m buying it to listen at home alone. It’s easy to use, and I don’t know how to use a smartphone,” Kim Young-hwan, 77, said while purchasing a cassette tape of trot compilation songs at CD Mart, a record shop in Jongno Ward, a central district in Seoul that is a common stomping ground for retired seniors.

Song Ho-joon, owner of CD Mart, said about 20 to 30 tapes are purchased daily, mostly by seniors.

“Some also buy cassette decks too,” he said. “Cassettes are much easier to use and durable compared to CDs. They probably used tapes all their lives.”

Some experts attribute the relatively high cost of vinyl records, another respected retro music format, as one reason collectors are scavenging for out-of-print cassette tapes.

“I think there is an element of a knee-jerk reaction to the cost of vinyl. Cassette tapes are sold relatively cheap, but the sound isn’t necessarily inferior when played on a good deck,” said music critic Kim Hak-seon.

Though it isn’t clear whether the renewed demand for cassette tapes will last, some retailers are picking up on the trend to try to meet the needs.

“We’ve gotten a hold of some past Sechskies albums recently,” Hwang Seung-soo, owner of Seoul Record in Jongno, said. “We’re seeing customers in their 20s and 30s coming in to the store asking for cassette tapes of such and such album, so we’re trying to accommodate.”