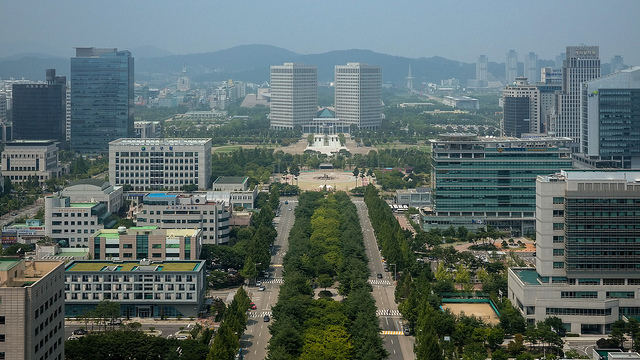 Some of the initiatives to be undertaken by SK Group in Daejeon include creation of a “creative village,” formation of a start-up incubation network, and support for small business start-ups run by those in their 50s or older.(image:TF-urban/flickr)

SEOUL, Oct. 12 (Korea Bizwire) – SK Group will invest more than 90 billion won (US$83.8 million) in the cities of Daejeon and Sejong to transform the areas into a Silicon Valley-like tech hotbed. The group announced its plan on October 10 in a ceremony to launch the Daejeon Creative Economy Innovation Center in which the President Park Geun-hye attended.

The President said in a speech at the event, “Comparing to the excellence in science and technology research capabilities in its state-run R&D institutions and universities, Daejeon’s performance in the area of entrepreneurship and commercialization of these R&D outcomes has been relatively weak. Technology developed but not in use is like a driver’s license sleeping in your drawer.”

“This is the time for Daejeon to make a second leap forward. I hope SK with its world-class prowess in info tech, semiconductor, and energy could become a great mentor and partner for Daejeon in its pursuit of excellence in the new more practical areas,” added the President.

Why Daejeon is called as “Asia’s Silicon Valley”

Daedeok Innopolis in Daejeon (Daedeok Research and Development Special Zone) is composed of 28 state-run research centers as well as 79 private research institutes with as many as 20,000 researchers. In addition, Daejeon established the WTA (World Technopolis Association) in 1998 with the view of realizing regional development through international cooperation with world science cities. Currently the WTA has grown to have 67 members from 32 countries, and it actively cooperates with many international organizations including UNESCO as its official consultative body. (Wikipedia)

Some of the initiatives to be undertaken by SK Group in Daejeon include creation of a “creative village,” formation of a start-up incubation network, and support for small business start-ups run by those in their 50s or older. As for the first initiative, SK Group revealed a blueprint in which it will establish a creative village in Yeondong District in Sejong City for an experimental energy town, a smart farm, a video-based intelligent security solution, smart local food, smart learning, and a new farm technology test bed.

For these experiments, SK will spend a total of 10.2 billion won. In addition, it will set aside 25 billion won to build a 25,700-square-meter “Science Village” by 2016. At the village, the group will host a start-up support center that tests the entrepreneurial firms’ technologies for commercial viability while providing mentoring to these firms.

In addition, the group will work with local organizations such as the Daejeon city government, Daejeon Creative Economy Innovation Center, the Korea Advanced Institute of Science and Technology, and the Innipolis Foundation, as well as private-sector start-up planners such as D.Camp, SAP, and Lab IX in creating a creative economy ecosystem within the metropolitan area. To this end, the group will spend 13.3 billion won.

By benchmarking the “Bravo Restart” program currently under way by SK Telecom for those small business owners who are also retirees, SK Group will lend support to its partner firms and start-ups as part of the corporate partnership initiative between large and small firms promoted by the government.

This is also what SK Group chairman Chey Tae-won has sought for years. The group formed a corporate partnership committee in 2008 for the first time among Korea’s large enterprises while creating an industry ecosystem for fostering small start-ups within it.