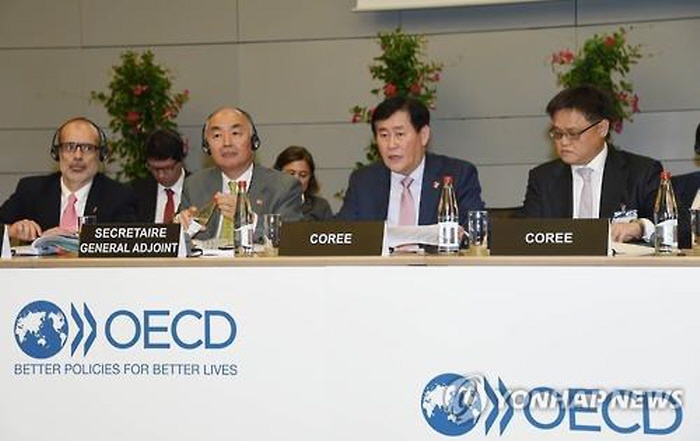 Speaking at the economic outlook session at this year’s Organization for Economic Cooperation and Development’s (OECD) ministerial meeting in Paris, Finance Minister Choi Kyung-hwan also said that concerted efforts should be taken to cope with the potential fallout of quantitative easing (QE), as the global economy is not out of the woods yet.

“There is a risk that monetary policy measures undertaken by advanced economies can have a negative impact on emerging economies, especially when overall growth momentum remains weak,” Seoul’s finance ministry quoted Choi as saying.

“For an orderly normalization of expansive monetary policies, it is imperative for the OECD to come up with a viable plan.”

Choi warned that if the matter is not handled properly, the world could face a crisis greater than the one that erupted in 2008.

In its latest growth outlook, the OECD said Wednesday that the global economy will likely grow 3.1 percent this year, down from 3.3 percent in 2014. The annual growth target is down from the 3.7 percent increase predicted in November.

The OECD said that ample liquidity resulting from various national QE programs accounted for half of the global gross domestic product in the last five months.

Choi, who doubles as deputy prime minister for economic affairs, said that for South Korea, a successful implementation of structural reforms is key to the country regaining its growth buoyancy.

“If reforms in the labor, financial, education and public sectors are successful, South Korea will be able to lead the OECD in growth as it did in the past decade,” the official said. “Labor market reform is of utmost importance for reviving the country’s competitiveness.”

Choi holds the rotating vice chair’s office along with France and the Czech Republic at the meeting attended by ministers from 34 countries.

This year’s gathering is focused on allowing member states to discuss ways to unlock investments for sustainable growth and jobs.

Other topics on the agenda include investment needed to create a low carbon economy, the best ways to link trade with investments and debates surrounding the post-2015 development agenda that strives to set a worldwide growth framework for the future.

After attending the OECD meeting, Choi will fly to London to preside over an investor relations session on Asia’s fourth-largest economy, the finance ministry said.

He is expected to explain South Korea’s overall economic condition and ongoing efforts to push forward sweeping reforms that can push up the country’s long-term growth potential, it said.

The meeting in the British capital is designed to boost overseas confidence in the South Korean economy and pre-empt any jitters that investors may have before the U.S. Federal Reserve raises interest rates.