A workout area on the bank of the Han River in Seoul is deserted while a sign in the right photo, supposedly written and hung by city officials, advises people to refrain from using the workout equipment when the fine dust level is high. (Yonhap)

SEOUL, Jan. 22 (Korea Bizwire) — Fine dust is increasingly becoming a major issue in the daily lives of South Koreans, while also beginning to force them to change the way they live, as well as where they spend most of their time.

“I usually bring my kids with me to the Han River park to play basketball or take a walk, but I decided to leave them home this weekend because the weather forecaster said the fine dust level will be bad,” Yoo Seung-hyeon, 42, said as she was taking a short walk along the riverside with her husband “not for fresh air but for a little exercise.”

“I would like to exercise more myself but I am afraid breathing too much of this air would rather be bad for my health,” said the mother of three from Seoul’s Banpo-dong. “I also used to come here a lot more frequently than I do now.”

Dust is keeping Yoo and others like her away from one of the most common forms of exercise for busy Seoulites. 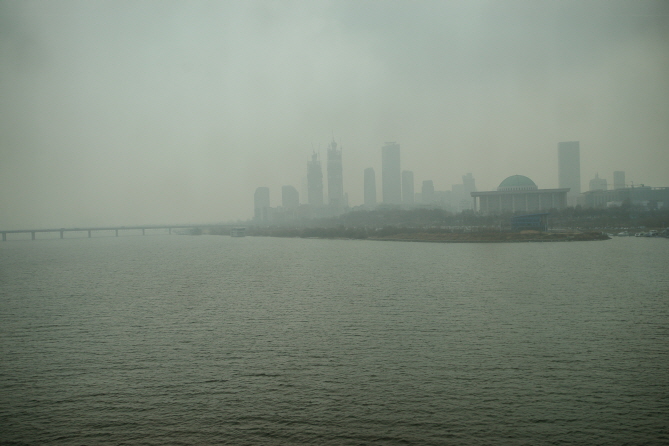 Heavy dust surrounding the area near the National Assembly in Yeouido, Seoul on Jan. 15, 2019. (Yonhap)

Seoul, along with the rest of the nation, has long suffered from what is known as yellow dust, fine dust particles blown from the vast sandy areas of China and Mongolia.

The decades-old phenomenon was recently given a new name — fine dust — when the yellow dust particles were found to also contain fine, or microscopic, dust that damages human lungs.

The danger from fine dust is apparently on the rise both in its severity and frequency.

In just four months of 2018, Gyeonggi Province that surrounds the capital Seoul issued 42 dust warnings and advisories, up from 36 in the same period a year earlier.

Face masks are no longer a rare sight while a steady increase in the number of days of fine dust is also forcing people to stay indoors, even for outdoor activities. 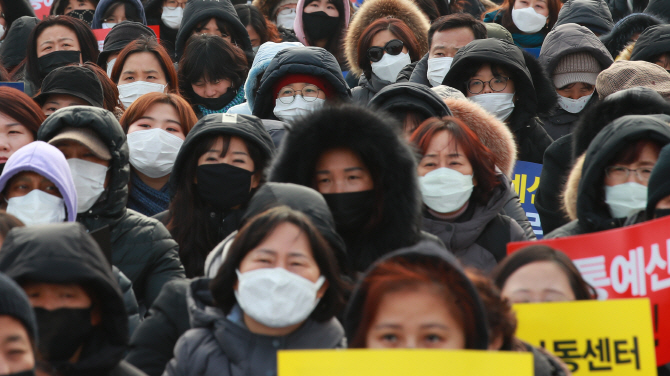 Most participants in a protest rally are seen wearing masks due to fine dust during a rally in Seoul on Jan. 15, 2019. (Yonhap)

South Korea already has one of the largest numbers of indoor, simulated screen golf centers with the number reaching more than 7,000 in 2017.

Market observers note such growth largely stems from the country’s lack of actual golf courses, but many who use those facilities say the fine dust has certainly added to the reasons for their visits.

“Screen golf clubs used to be where we would go when we could not actually go out to play,” said Hahn Jong-han, 44.

Hahn, who works in Seoul and lives in Seongnam, Gyeonggi Province, says the only times when he would give up going out to the field used to be when it was raining or snowing.

“But now we actually cancel our reservations when the fine dust level is too high, and instead go to play screen golf,” he said.

The indoor activities industry is expanding to other traditionally outdoor sports, including baseball.

Hahn, a member of an amateur baseball club he and his high school friends formed, says his team occasionally takes its practice to indoor screen baseball clubs when the fine dust level is at its worst.

The Korea Baseball Organization recently changed its regulations to allow cancellation or suspension of a professional baseball game in case of a severe fine dust warning. 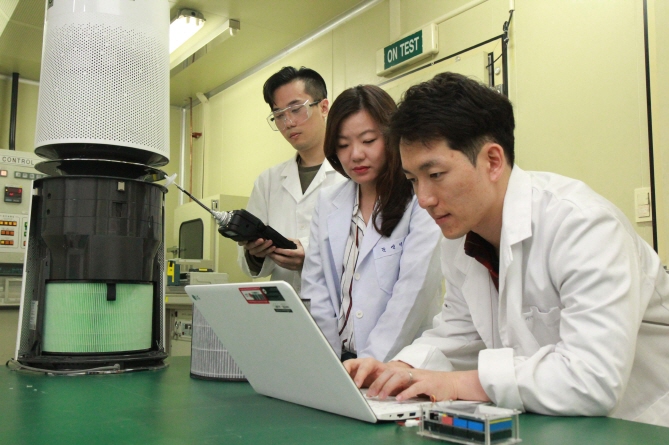 On the bright side, fine dust is creating new opportunities for many businesses.

Lee Jae-yong, vice chairman and heir apparent of tech giant Samsung Electronics Co., recently revealed that the firm has been operating a new research and development center for fine dust and related products.

Once considered an extravagance, air purifiers are now fast becoming a daily necessity not only for households and workplaces but also businesses that receive customers.

More than 2 million air purifiers are estimated to have been sold in the local market alone last year, more than four-times higher the roughly 500,000 units sold in 2014, according to market watchers.

Samsung and its largest local and global competitor, LG Electronics Co., are seeking to offer an all-in-one solution for air quality, both recently introducing artificial intelligence-based air conditioners that can also purify air.

“We will step up efforts to develop the air care technologies to help consumers better withstand heat waves and fine dust,” the Samsung official added.

Against such a backdrop, the government will soon launch its own project to develop air purifying systems for schools and public facilities.

According to the education ministry, the government will inject up to 30 billion won (US$26.6 million) by 2023 to identify the effect of fine dust on students and develop school dust management systems.