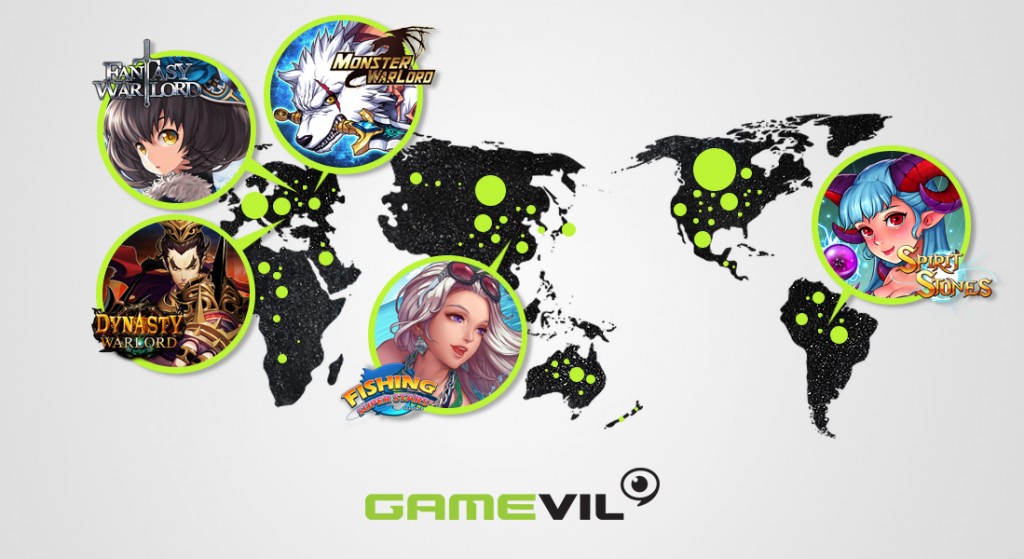 Observing that there is a mobile game that brings particular attention in one country or another, Gamevil sees the long-running games for more than two years benefit from its localization policy and stable server performances. (image: Gamevil)

SEOUL, Aug. 23 (Korea Bizwire) – Gamevil, a leading game publisher in Korea, is spurring to be a global one, as its mobile games are selected in the top ranking games in the game charts across the world.

According to the game firm, its fishing game “Fishing Superstars” is gaining popularity in Southeast Asia and it is hitting big in the Europe and the Middle East with its Warlord series. Meanwhile, in Latin America, “Spirit Stones” catches the attentions of the game mania.

Meanwhile, its warlord series led by almost two-year old strategic social network game “Monster Warlord” and its sequels “Dynasty Warlord” and “Fantasy Warlord” are best-selling games in Europe and the Middle East. Among them, “Monster Warlord” secures high ranks in App Store in Kuwait and is listed in the top 5 revenue-generating games of Google Play’s adventure games in 12 countries including Germany, France, Russia, and UAE.

Along with the games, its roll playing game “Spirit Stones” is enjoying constant popularity in Latin America including Mexico and Brazil.

Observing that there is a mobile game that brings particular attention in one country or another, Gamevil sees the long-running games for more than two years benefit from its localization policy and stable server performances.

The company has been focusing on steady selling games which can be played for a long time across the world by avoiding short-live mobile games. Recently, it has published “Kritica: Chaos Unleashed” based on its service knowhow and expects it will be another long-run game.