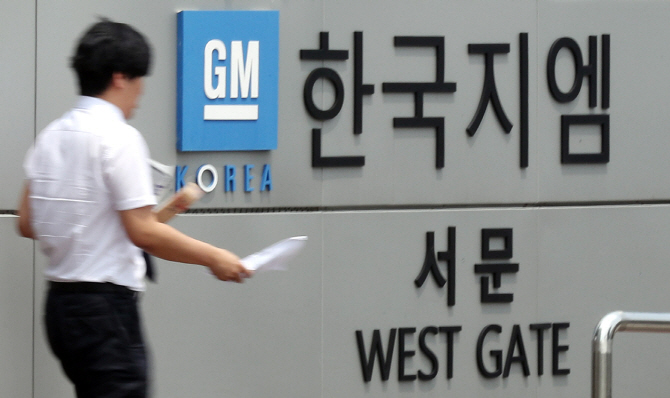 According to corporate sources, Kaher Kazem, the CEO of GM Korea, recently organized a staff meeting, where he claimed that the company may soon fail to secure funds to pay subcontractors for auto parts, which could lead to the suspension of production for some models.

The suspension may induce GM headquarters to relocate the production of the Chevrolet Trax to China, industry watchers warned, which may deepen the cash shortage of the carmaker.

GM Korea currently needs 1 trillion won (US$935 million) in cash this month, excluding the loan it has to pay its U.S. headquarters. The expenditure includes payments to subcontractors, as well as salaries for employees and compensation to those that want to leave the company on a voluntarily retirement program.

Should GM not extend deadlines for the loans, the local company may need a whopping 2.7 trillion won in cash this month alone.

Industry watchers said the worst scenario of the American automaker suspending its business in South Korea may become a reality unless some breakthrough is made.

Earlier this month, the CEO reportedly told its staff that the company may fail to make payments this month unless related entities inject money into the company.

When GM Korea decided to shut down its plant in the southwestern city of Gunsan in February, the company said it still plans to continue its operation in South Korea. Industry watchers said there are signs that this may be changing.

“As workers were not notified of the shutdown of the Gunsan plant in advance, follow-up measures, such as seeking bankruptcy or exiting the market, may also be announced to the employees without notice,” a GM Korea official said.

GM Korea’s sales in South Korea, meanwhile, plunged after announcing its shutdown of the Gunsan plant.

In February, GM Korea sold 5,804 units of cars in South Korea, down 48.3 percent from a year earlier. In March, the company managed to sell 6,272 units, crashing 57.6 percent on-year. The performance was the lowest among the five South Korean carmakers.

It marked the first time for GM Korea to rank at the bottom among the five carmakers after the company was founded in 2002.

The subcontractors are also facing a crisis, as local financial companies are refraining from giving loans to the companies amid concerns over the future of GM Korea. The South Korean government is currently mulling measures to support the affected subcontractors.

Local dealerships of GM Korea are taking a hit as well, as many are selling fewer cars and forced to close. As of end-March, there were 284 GM dealerships in the country, down 16 from April 2017. The carmaker sells its vehicles under the Chevrolet badge.

“The remaining 280 shops will not last for long if the monthly sales remain between 5,000 and 6,000 units, as the figure should at least reach 10,000 units in order to maintain operation,” an official representing dealerships said.

Industry watchers said the falling number of salesmen is also a potential threat for GM Korea, as the company needs at least 3,000 employees to sell 150,000 units of cars annually, and it costs 6 million won to educate one salesperson.

The state-run Korea Development Bank (KDB), the Korean unit’s main creditor, recently launched due diligence on the financial status of GM Korea. The study to be concluded in late April will provide a basis for deciding whether to invest an additional 500 billion won in GM Korea.

An official from the South Korean government said the research may end sooner if the GM headquarters cooperates with the process.

The KDB, meanwhile, reiterated that there will be no financial support if GM responds irresponsibly.

“GM is currently not cooperating in regards to core documents,” an official from the policy lender said, claiming the bank will only make the decision on investment after accessing all accurate data.