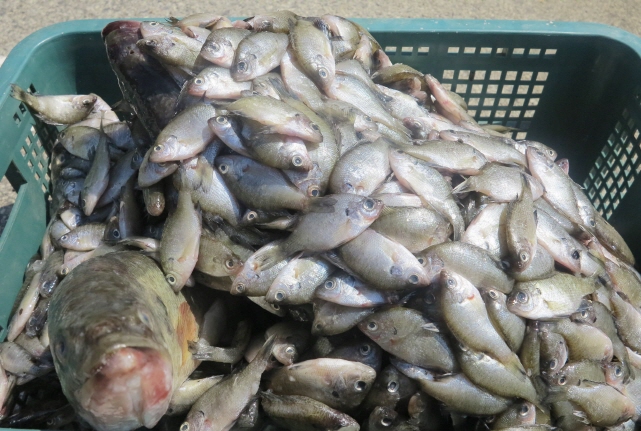 CHEONGJU, Jul. 25 (Korea Bizwire) — The North Chungcheong provincial government has been carrying out an operation to wipe out invasive fish species that are disturbing ecosystems in local lakes.

Local government officials have bought 5.34 tons of carnivorous fish such as bluegill, bass and skygazer from the Okcheon Waste Incineration Plant.

The fish, caught by fishermen in Daecheong and Geumgang lakes, had been kept frozen. Fishermen were paid prize money of 3,200 won per kilogram of fish caught.

Read More: Korea Declares War on “Enemy No. 1″ in Ecosystem

The local government had been buying unwanted fish since 2009 and has bought a total of 403 tons of carnivorous fish since the measure was implemented.

Bass accounted for the greatest quantity of fish bought at 116 tons, followed by bluegill and skygazer at 108 tons and 83 tons, respectively. A total of 1.29 billion won in prize money has been disbursed.

All of the fish collected are made into feed or compost and distributed to farms for free. One government official said that powders made from high protein fish such as bass and bluegill are popular at fish farms as fish food.

Unlike the native skygazer, bass and bluegill were introduced from the United States in the 1970s as food for the masses.

But when they were ostracized from the local dining tables, they infiltrated the nation’s rivers and lakes, becoming the new uppermost predator in the freshwater ecosystem.

Having taken over the lakes, bass and bluegills have been devouring local fish like carp, smelt, and sweetfish.

North Chungcheong plans to spend 150 million won this year alone to buy back fish that are disrupting local ecosystems, which adds up to approximately 46 tons of fish.

Another official said that the number of the fish is not decreasing, even with the government buying back 40 tons of fish each year.

“This is why the province is trying to diversify its efforts by holding fishing events and other methods” to root out the culprits, said the official.