The 52-hour policy was initially devised to cap the average working hours at 52 on a weekly basis. (image: KobizMedia/ Korea Bizwire)

SEOUL, Dec. 11 (Korea Bizwire) — South Korea plans to give a one-year grace period to the country’s small and medium-sized enterprises (SMEs) in adopting the 52-hour workweek system, the labor ministry said Wednesday, reflecting financial concerns for the smaller firms amid an economic slowdown.

The 52-hour policy was initially devised to cap the average working hours at 52 on a weekly basis in Asia’s fourth-largest economy, known for long working hours compared with other Organization for Economic Cooperation and Development members.

An average worker here spent 1,963 hours working in 2018, only after 2,257 hours in Mexico and 2,018 hours in Greece, according to figures by the state statistics agency. The figures for Mexico and Greece are from 2017 data.

The plan was scheduled to be expanded to smaller firms with 50 to 299 employees next year after first going into effect at large companies in July 2018.

However, SMEs claimed it would add to their financial burden amid a slowing economy and employee shortage.

Labor ministry data compiled in October showed that 42.3 percent of SMEs were not ready to adopt the system and faced difficulties in hiring employees due to irregular work flows and cost issues.

The confirmed grace period effectively delays smaller firms from adopting the policy by a year, which means that employees at those companies can continue to work more than 52 hours a week in 2020.

The ministry said it plans to implement support measures to help SMEs prepare for the 52-hour workweek policy.

Among the policies are temporarily increasing foreign employee quotas, supporting funds for hiring and facility investment, and providing consultancy services to SMEs.

The ministry also urged the parliament to pass a revision bill that would allow companies to expand flexible working hour systems from three to six months.

The announcement comes roughly a month after the labor ministry first announced plans to consider giving a grace period to smaller firms. 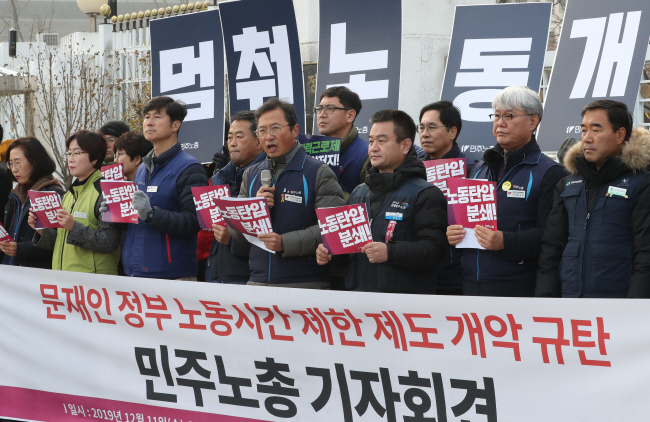 Labor groups had criticized the plan, calling it a “labor despair policy.”

“The Korean Confederation of Trade Unions (KCTU) is angered by the Moon Jae-in administration’s labor despair policy that has given up the minimum 10,000 won (US$8.40) wage policy, as well as the policy on shortening working hours,” KCTU, one of the country’s two largest labor umbrella groups, said in a statement.

Following the government announcement Wednesday, KCTU members held a news conference in front of the main government building in central Seoul and asked Minister of Employment and Labor Lee Jae-gap to resign for retaining the long working hour system and deferring the punishment of 52-hour workweek rule violators.

They accused the Moon government of attempting to give up its shorter workweek policy and abusing administrative measures by shelving legally guaranteed labor conditions.

The Federation of Korean Trade Unions (FKTU), another labor umbrella group, also held a news conference in Seoul to condemn the Moon government for seeking to abandon its pledge to shorten legal working hours.

“Today’s announcement (by the government) will send a wrong signal to individual workplaces, which have held labor-management negotiations to curtail their working hours,” the FKTU said, vowing to step up its struggles against the government.

The KEF said the one-year grace period will help the concerned businesses better cope with the 52-hour workweek.

The federation agreed to the introduction of the 52-hour workweek but called for more flexibility in its implementation.