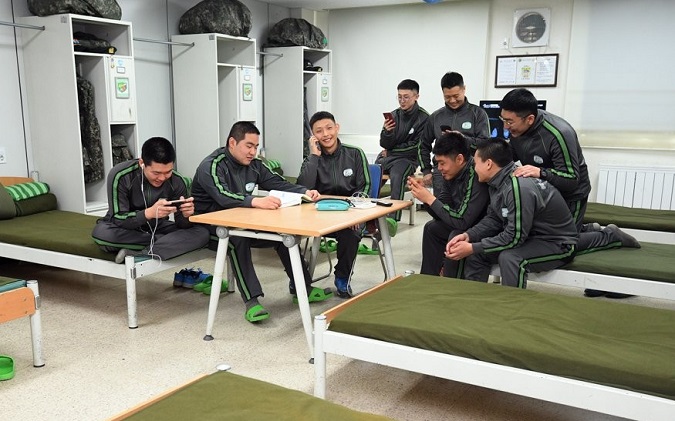 Soldiers use their mobile phones after daily duty at a military unit in Gapyeong, northeast of Seoul, on Jan. 31, 2019. (Yonhap)

SEOUL, June 26 (Korea Bizwire) — Rank-and-file soldiers will officially be allowed to use their mobile phones after work starting next month, the defense ministry said Friday.

Since April 2019, the ministry has allowed all draftees to use mobile phones, which had previously been banned for security reasons, on a trial basis.

“The trial implementation found that the measure has many positive effects. It has helped troops better adapt to military life and became a useful means of their self-improvement,” a ministry official said.

According to surveys, an increased number of service personnel said their communication with superior officers as well as the outside world has improved and that they felt more mentally stable after using mobile phones at barracks.

Under the measure, enlistees will be allowed to freely use their individual mobile phones at all on-base places, except for high security areas, between 6 p.m. and 10 p.m. on weekdays and between 7 a.m. and 10 p.m. on holidays.

But using phones for taking photos, videos or recording sound is prohibited.

To prevent possible leaks of military secrets, a new security control system and punishment regulations were introduced, the ministry said, adding that no such leakage incidents took place during the test period.

The full implementation decision was made during a committee meeting on the military service policy presided over by Defense Minister Jeong Kyeong-doo.

He is suspected of distributing content of women performing gruesome sex acts under coercion, even during his active-duty service, with his personal gadget.

“We devised diverse measures against expected side effects, such as providing more gambling prevention programs and counseling services,” the ministry said.

“We will also sternly deal with any breaches of regulations and continue to make efforts to create a stable culture of using mobile phones.”