GOSEONG, Aug. 14 (Korea Bizwire) — A man almost doomed to a watery grave was rescued by the heroic efforts of beachgoers this past Saturday at a beach in Goseong County.

He was first spotted by 56 year-old Wang Chang Man, who was relaxing on the beach as part of his summer holiday. According to Wang, a man on a large, inflatable tube was adrift on the waters. It seemed to him that the currents were pushing the tube farther and farther out to the ocean.

Fearing the worst, Wang called for help from a security guard at a condo complex situated behind the beach.

While a rescue party was being formed, a stroke of fortune pushed the man in the tube back towards the direction of the beach. However, one particular strong wave turned the tube upside down, separating the man from his inflatable refuge.

Perhaps sensing the opportunity, three people on the beach dove into the water and swam towards the man. When they grabbed him, they swam back to the shore and grabbed the outstretched hands of beachgoers who had formed a single file line to pull the swimmers back to the beach. 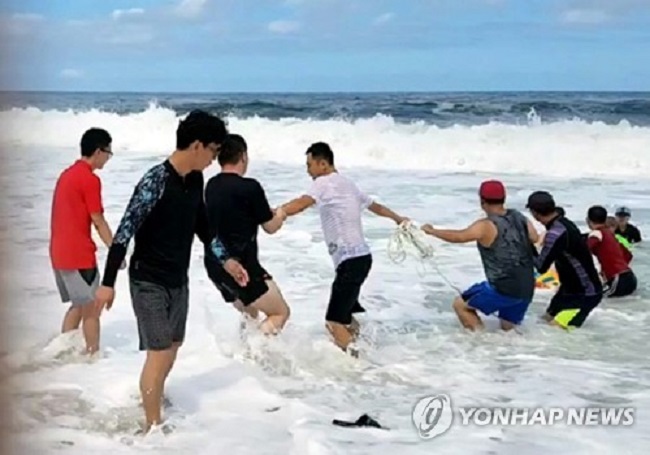 The rescued man began to breathe easy moments after being pulled from the water. (Image: Yonhap)

The rescued man began to breathe easy moments after being pulled from the water.