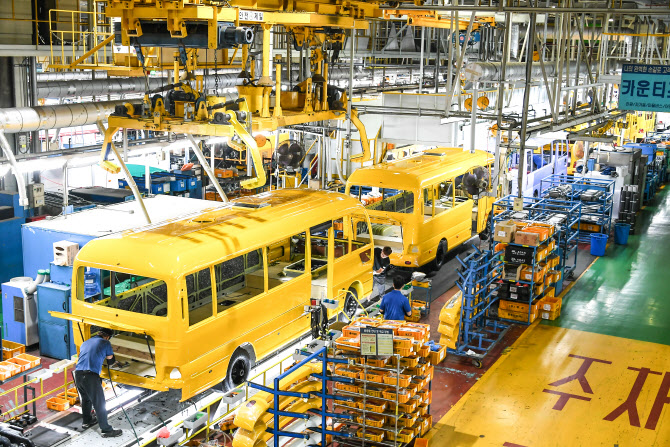 This photo provided by Hyundai Motor shows the truck assembly line at its Jeonju plant.

SEOUL, Oct. 5 (Korea Bizwire) – Internal conflicts over job sharing among plants are deepening within the labor union at Hyundai Motor Co., with some unionized members even coming to blows during an argument over proceedings.

The employment stability committee that the company’s management and labor union planned to host at Hyundai plant in Ulsan, 414 kilometers southeast of Seoul, on Sept. 30 was cancelled.

The management and the labor union originally planned to negotiate over the adjustment of jobs among plants to increase the production of the Palisade SUV as well as to address the shortage of supplies at the company’s Jeonju plant in North Jeolla Province.

However, the No. 4 Ulsan plant labor union strongly opposed such a plan.

Members of the No. 4 Ulsan plant labor union blocked the leadership of the company’s labor union from entering the conference room, and an executive member of the Jeonju Plant labor union was injured during the process.

Such conflicts stemmed from disputes over job sharing.

To address job insecurity, management attempted to transfer production of the Staria minivan from the No. 4 Ulsan plant to the Jeonju Plant and increase the output of Ulsan plant.

To make this plan a reality, an agreement between management and the labor union is needed.

However, the No. 4 Ulsan plant labor union is opposing this plan based on its judgment that maintaining a varied lineup is more advantageous to its employees.

The union has insisted on keeping both the Palisade and Staria production lines, on the basis of its judgment that it could maintain jobs even if one of the two loses popularity in the future.