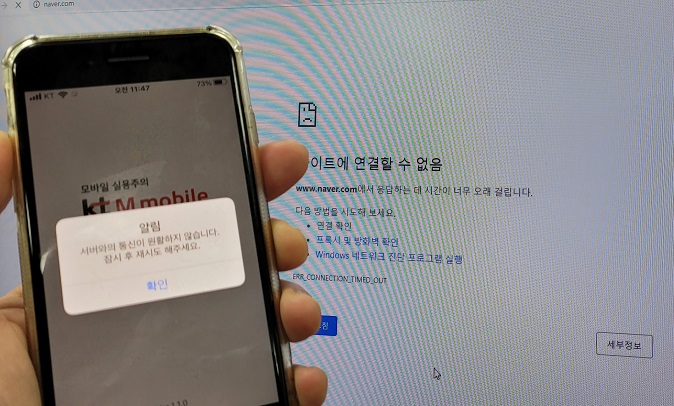 The abrupt disruption of KT’s wired and wireless internet services occurred around 11 a.m. due to what the company said was a “routing error” and continued for about an hour, inflicting great chaos and inconvenience on government offices, companies, hospitals, schools, restaurants and many other places dependent on internet connectivity.

Hospitals and pharmacies using KT’s wired and wireless internet services also suffered considerable inconvenience due to difficulties in treating the information of patients and customers.

A civil servant working at a public institution in Bucheon, west of Seoul, said his office was paralyzed by an internet outage that began around 11:25 a.m., causing panic among him and his colleagues for a while.

“A computerized accounting was under way when the internet was suddenly disrupted. I and my colleagues panicked, because the work was supposed to be done before noon,” said the official, surnamed Kim.

A company employee, surnamed Lee, said he failed to send an important document in time due to KT’s internet network problem.

“I was trying to email my document while working at a cafe, but a communication problem occurred, and I was so embarrassed,” Lee said. 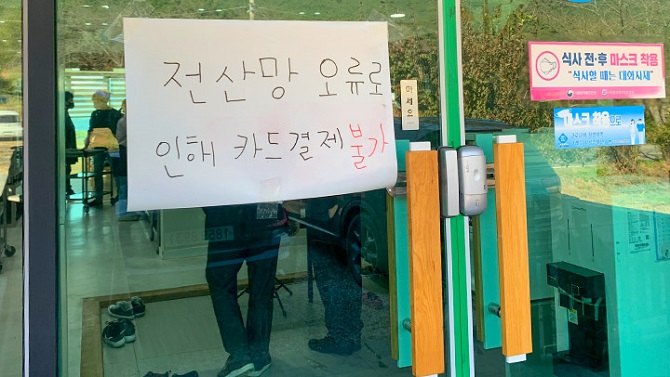 A notice posted at the entrance of a restaurant in Gurye, southwestern South Korea, on Oct. 25, 2021, says credit cards cannot be accepted due to a computer network error. (Yonhap)

Some students of Hanyang University in Seoul complained their programs did not work during an online testing for the “law and human rights” course due to the KT network disruption.

At other domestic universities, online classes using the KT network had to be suspended, while students subscribed to KT were unable to follow online classes properly.

Employees and customers at hospitals, banks, securities companies and restaurants also complained of great inconvenience due to KT’s internet disruption.

A Seoul office worker, surnamed Park, said she unsuccessfully tried to make an online reservation for lunch at a restaurant and later failed to use a QR code for entry into the restaurant.

Another office worker in Seoul said his stock trading application did not work properly for about an hour from 11:30 a.m.

“I had to turn my stock trading app off and on dozens of times due to the internet disruption. I usually trade stocks during lunchtime, and I was upset, because I could not sell stocks that I should have sold,” said the worker.