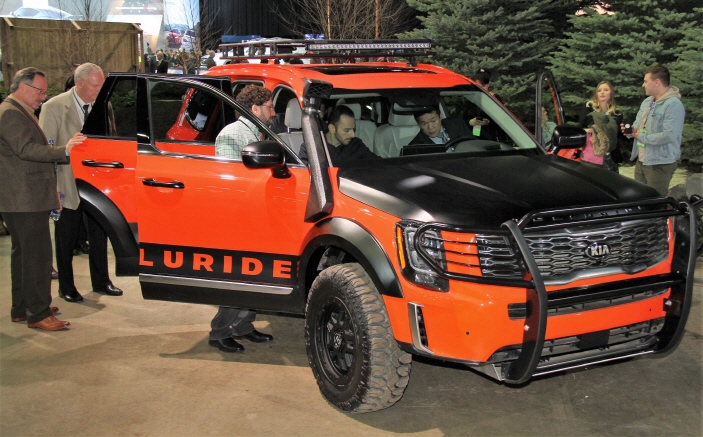 Some also suggest that the Telluride will fail to meet local expectations in South Korea since it was specifically designed for the North American market. (image: Kia Motors Corp.)

Kia’s sales department has been pushing the automaker to bring the SUV to South Korea, as it has begun to attract the interest of South Korean customers.

The finance and manufacturing departments, however, are opposing the idea.

“The Palisade, Hyundai’s new SUV model, created a sensation in the South Korean market, confirming the fact that there is high demand for large-sized SUVs in the country. As such, the sales department has been putting pressure on the company to launch the Telluride to boost sales,” a Kia source said.

“The problem, however, is that we either have to set up assembly lines in South Korea or import the Telluride from overseas, both of which are difficult in realistic terms.”

“For now, the official stance is that there are no plans for Kia to launch the Telluride in South Korea.”

Some also suggest that the Telluride, unlike the Palisade, will fail to meet local expectations in South Korea since it was specifically designed for the North American market.

Currently, the Telluride is being manufactured at Kia’s manufacturing site in Georgia, equipped only with 3.8L gasoline engines for all of its four trim levels, adding to concerns that it would be difficult to produce the model in South Korea.

In order to compete in the South Korean market, the Telluride would also have to have a diesel engine option, just like the Palisade, which will be costly to develop.

Choosing to build gasoline-only models also brings up the problem of part shortages among partner companies.

Kia Motors Manufacturing Georgia already produces 3,000 vehicles each year for export, meaning that a new production line for the Telluride in South Korea would be uniquely for the local market.

In addition, Kia’s Mohave facelift is scheduled to be released in the second half of this year, which may further undermine the initiative to sell the Telluride in South Korea.