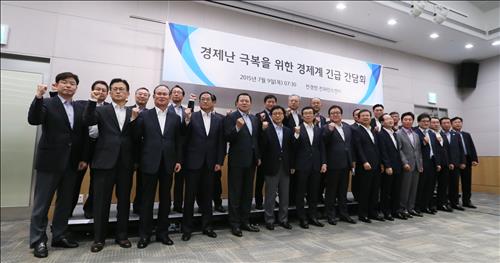 In a joint statement, presidents of the country’s top 30 business groups shared the need to create “new momentum” for the country to get over what they see as an economic crisis. (image: Yonhap)

SEOUL, July 9 (Korea Bizwire) — Business leaders in South Korea vowed Thursday to keep pushing for their planned investment and taking the lead in rejuvenating the economy, which is struggling with slumping domestic demand in the wake of the Middle East Respiratory Syndrome (MERS) outbreak.

In a joint statement, presidents of the country’s top 30 business groups shared the need to create “new momentum” for the country to get over what they see as an economic crisis.

“Our economy is confronting such global risks as the weak yen, slowing growth in China and the fallout from Greece’s default, which resulted in the six consecutive months of export declines,” the statement said.

“Domestic demand, which showed signs of recovery early this year, has also been frozen again, raising concerns that the economic growth (for this year) could fall to the 2 percent range,” it added.

The statement issued during an emergency meeting of business leaders organized by the Federation of Korean Industries came as consumption and service-sector businesses have suffered marked setbacks following the MERS outbreak.

Since the disease was first confirmed on May 20, it has claimed the lives of 35 people, sending the country into a panic, though the spread seems to be subsiding in recent days.

Earlier this week, the government submitted an 11.8 trillion won (US$10.4 billion) extra budget bill to the National Assembly for approval, which is part of a larger 22 trillion won stimulus program designed to cope with the impact of MERS and breathe new life into anemic consumer spending.

“We share the need to create new growth momentum to tide over the economic crisis,” the business leaders said in the joint statement. “We will stick to our investment plans without being swayed by variables from home and abroad, while focusing on nurturing new business.”

They also urged the government and the National Assembly to pass the extra budget and other stimulus bills “as swiftly as possible” in a way that could help bring about a favorable economic mood.

The economy, Asia’s fourth-largest, has been suffering a decline in outbound shipments and sagging domestic demand, although the Bank of Korea, the country’s central bank, has slashed its key rate by a total of 1 percentage point in less than a year to a record low of 1.5 percent.