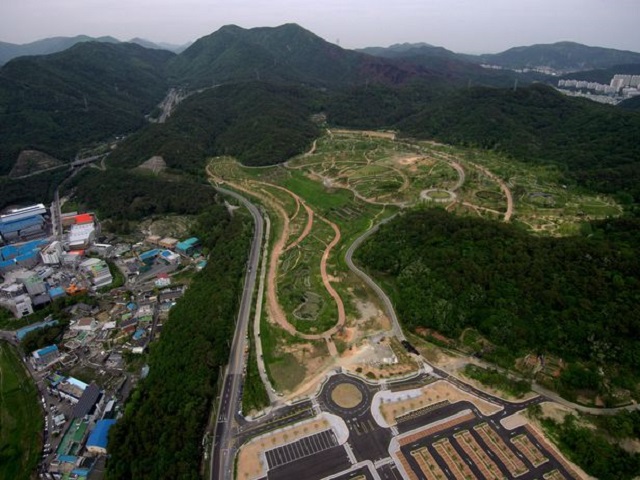 BUSAN, May 19 (Korea Bizwire) — A landfill-turned-botanical garden will be temporarily opened to the public in the southeastern port city of Busan this week, the municipal government said Wednesday.

Haeundae Arboretum built on a former landfill site in Seokdae-dong, northern Busan, will partially open Thursday as the first phase of its construction has been completed, the government said.

The arboretum, which will eventually cover 628,275 square meters, far bigger than the 473,911-square-meter Busan Citizens Park, currently the largest park in the city, will be officially completed at a cost of 84 billion won (US$74 million) in 2025.

The site, used as a landfill from 1987 to 1993, caused damage to the environment by emitting odors, leachate and harmful gases.

The Busan government mapped out the blueprint for the arboretum in February 2010 after the Korea Forest Service conducted a feasibility study on the project and gave the green light.

“Nearly 30 years have passed after the closure of the Seokdae Landfill. Now there is almost no methane gas emitted from the site,” a Busan municipal official said.

The first phase of the arboretum includes the so-called Healing Forest, which covers 414,864 square meters, and a parking lot that can accommodate 655 vehicles at a time.

It features about 190,000 trees of 634 different species, various amenities, such as restrooms, pavilions and chairs, and a small zoo where donkeys, sheep and goats can be fed.

It is open only on weekdays and admission and parking are free. Only group tours will be permitted through reservation until September and forest commentators will guide the visitors.

The city government is considering permitting individual visits and opening of the arboretum on weekends and holidays, beginning in October.

It said the second phase of the arboretum, slated for opening in May 2025, will feature a greenhouse, a forest cultural exhibition center, a visitors center and sports facilities.