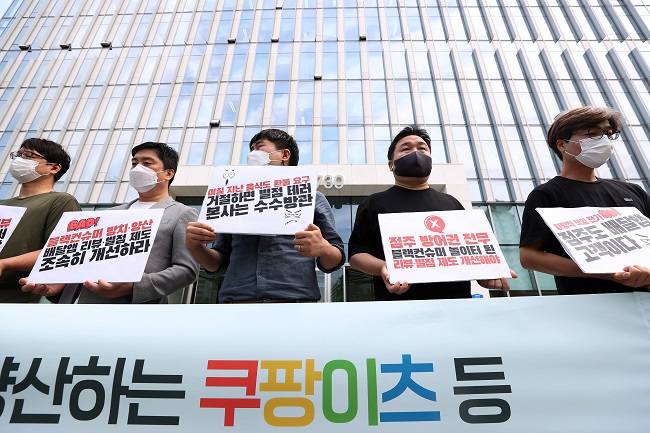 Civic groups hold a press conference in front of the headquarters of E-commerce giant Coupang Inc. in Seoul on June 22, 2021 (Yonhap)

SEOUL, June 23 (Korea Bizwire) — The rating systems offered by Coupang Eats and other food delivery apps are being criticized for being manipulated by malicious consumers, with food vendors calling for the app owners to crack down on malicious reviews.

A group of civic organizations including People’s Solidarity for Participatory Democracy and the Korea Franchisee Union held a press conference on Tuesday to urge delivery apps to protect food vendors from malicious consumers who give poor ratings or bad reviews with malicious intent to hurt sales.

“Reviews and ratings are the absolute standard for assessing food vendors on delivery apps, and it is particularly difficult for food vendors to effectively address malicious consumers,” they said.

Food vendors also face unjust demands for refunds or additional benefits, adding to the vicious cycle in which delivery apps are constantly abused by malicious consumers.

They said that food vendors have no choice but to fall victim to one-sided arguments from consumers, particularly on Coupang Eats, since they are unable to reply to these comments and reviews.

In response, Coupang Eats announced that it will take measures against malicious consumers by setting up an independent entity to protect food vendors.