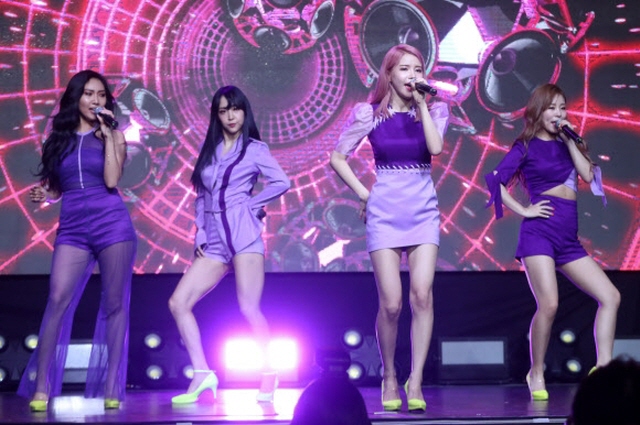 Mamamoo performs at a media showcase for its fifth EP album “Purple” on June 22, 2017, at the Yes24 MUV Hall in Seoul. (image: Yonhap)

SEOUL, Jun. 23 (Korea Bizwire) — With an early summer heat wave gripping the nation, dormant K-pop players are coming out of the woodwork to wage a hot music chart war this summer — with Mamamoo taking aim with its fifth EP album “Purple.”

“The color purple is produced by mixing pink and blue. Pink exudes vividness while blue has a sense of depth to it. The title holds the meaning of mixing the two colors (artistically),” member Hweein said of the album’s title at a media showcase at the Yes24 MUV Hall in western Seoul on Thursday.

“Purple” holds five new songs that are all distinctively unique. The title track “As For Me,” an outspoken song all about shameless arrogance and pretentious bravado, was written by Kim Do-hoon, founder of Mamamoo’s management agency RBW, who has produced the quartet’s music since their debut. The team described their latest concept as “cutie pretentiousness.”

The K-pop group has been known to be funky and witty or boyish at times, but with “As For Me,” it decided to go with a strong but at the same time feminine concept.

Since their debut, Mamamoo has occupied a unique place within the female idol market. Though categorized as an “idol,” the ladies have always carried a strong sense of theatricality in their songs and live performances.

Musically, Mamamoo has, to a certain degree, always incorporated a retro sound in modified forms of R&B or funk. But the team said they are always trying to change artistically.

“We started out with retro-style music. The sound suited our vocals. Then we made a major shift in direction with ‘Um Oh Ah Yeh,’” explained Solar.

Solar further added, “This time I think we tried to upgrade our music, to be like the color purple. To become more stylized while at the same time beautiful.”

Mamamoo, along with BLACKPINK, is one of the first major players taking aim at the summer music charts and airwaves.

“We are as determined as we have been in the past. It quite is a tiring experience. We are cheering for each other, telling each other ‘We can do it, it’s okay,’” Hwasa said.

“I think we are a group that can satisfy both the eyes and ears,” she said, looking back on the group’s some three years since debut.