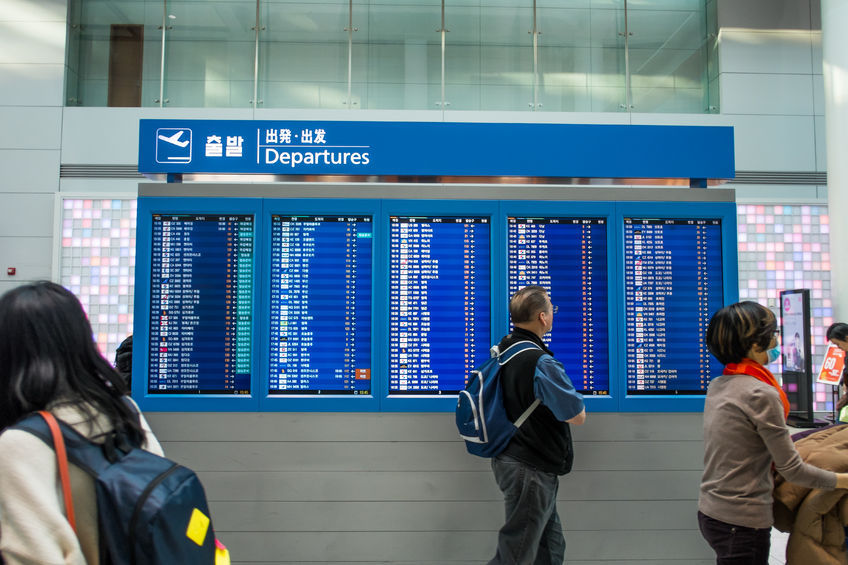 SEOUL, Aug. 3 (Korea Bizwire) — Just seven years ago, Cho Soo-kyung, a public relations agency worker, hardly had time for herself as her job demanded nearly every moment of her waking hours. A sense of devotion and achievement were her rewards, or at least that’s what her company wanted her to believe.

“Then, I was happy when my clients were happy. There often were many unfair or unreasonable demands that I would have said no to had it not been for my company or my colleagues who had a stake in what I did,” the 39-year-old recalled.

Cho was a typical Korean employee finding virtue in hard work and being able to provide for their families.

She quit the company in April 2010 when she reached a point where her body simply could not afford to be abused any longer. Then in September, a former client asked her to do a simple job, and she got back in the business with her own small agency.

She now works only about three hours a day, compared with 15- or 16-hour workdays at her previous job.

“Now I make much more than what I would have had I stayed with my former employer, and have all the time I need for myself and family,” she said.

What Cho has is a dramatic example of what many South Koreans, especially the young, want for themselves — a work-life balance, or “Wolibal” (pronounced wo-la-bel) in Korean.

The importance of personal life or time for oneself from work may have been long stressed throughout the world with leading global firms, such as Google and Facebook to name a few, seeking ways to further cut down on their working hours that already last only about eight hours a day on average.

Surprisingly, the people here are only starting to catch up.

Some blame the high unemployment rate, while others point to the stunningly high cost of living in Asia’s fourth-largest economy.

The country’s jobless rate stood at 3.8 percent in June, but the unemployment rate of those aged between 15 and 29 years has remained at around 10 percent after reaching 12.3 percent in February, the second highest in the country’s history.

“The truth is that Wolibal still isn’t the top priority while looking for a job because a nice paying job is so hard to come by these days. But it certainly is a high priority, and people will often debate over which job is better in terms of personal time and opportunities to grow given that the jobs available pay about the same amount,” Yoo Jung-hoon, 23, said.

Yoo was lucky enough to find a full-time job at a local newspaper as soon as she got out of school, but she said how much it paid and what time she would get off from work certainly played a role in her decision.

“In an online forum for jobseekers I used to go to, people often exchange information and hold discussions on which company has the best environment to realize Wolibal,” she said.

Local firms are catching up too.

Olive Young, a medium-sized cosmetics firm, has extended the period of paid leave for its male employees to two weeks from three days when they have a new baby.

Male and female workers at CJ Group, a major business conglomerate here, may take up to one month off when their children begin elementary school.

Those who seek to find an optimum balance between how much they make and how much they spend at work differentiate themselves from a growing number of people pursuing what is known as a YOLO (You Only Live Once) lifestyle.

Yoo noted a YOLO lifestyle focuses more on what one wishes to do with his or her life, whereas “Wolibal” emphasizes making a decent living: financially, physically and emotionally.

“People still have to consider making as much as they can, but more seem to think entirely giving up their personal life may not be worth it,” she said. 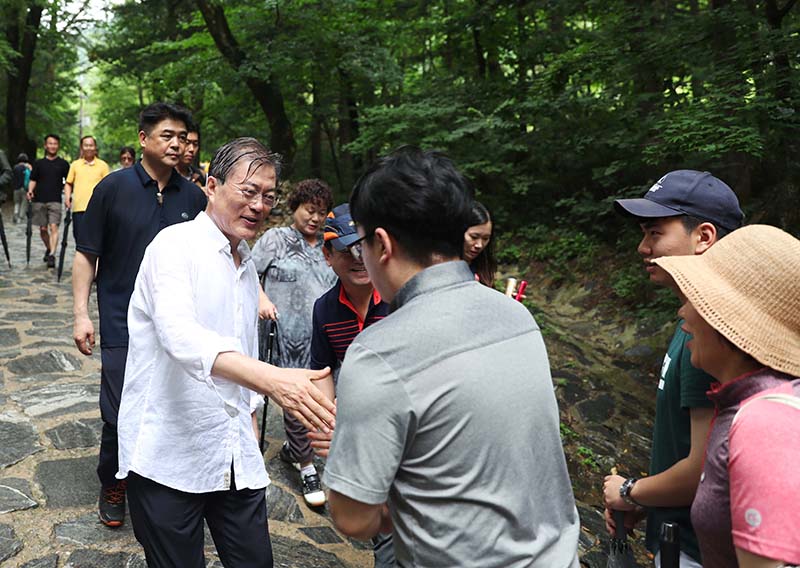 President Moon Jae-in shake hands with a group of visitors at a mountain in Pyeongchang, Gangwon Province, on July 31, 2017, the first day of his five-day summer vacation. (image: Cheong Wa Dae)

The new president began his five-day summer break at the start of this week. Earlier he said he planned to spend all his paid leave days, which could make him the first South Korean president to do so.

Yoon Young-chan, Moon’s chief press secretary, said doing so would be as important for the president as it would be for the rest of the people.

“President Moon and the administration have been and continue to be sending a consistent message; that we need to have a better life,” he told Yonhap News Agency.

Though never explicitly said, most of Moon’s new policy initiatives certainly focus more on income and reduced working hours — the basic ingredients of balance between work and life.

In 2015, South Korean workers put in an average 2,113 hours a year at work, the second highest among all member nations of the Organization for Economic Cooperation and Development (OECD) and 347 hours more than the OECD average of 1,766 hours in the same year, according to an earlier report.

He has also vowed to enforce a minimum 12-day paid leave for all salaried workers. In 2013, each South Korean worker had an average 14.2 days in paid leave available. They only spent 8.6 days in leave that year.