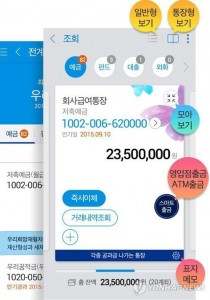 SEOUL, July 31 (Korea Bizwire) – From now on, there is no need to look for a bank passbook buried deep inside the drawer to take money out of the bank. A new mobile bank passbook will replace the cumbersome paper-based passbook.

Currently bank customers who want to withdraw cash out of an ATM must take a paper-based passbook or a debit card. In contrast, mobile passbook customers will be able to take out money with a smartphone and the input of a password.

Those customers with a multiple number of accounts including savings account, installment savings account, loan account, and fund and insurance accounts can manage them easily with the smartphone app. Instead of about 200 transactions recorded on a paper passbook, the mobile passbook can record an unlimited amount of transactions for up to 10 years, which comes handy when the user needs to compile his income for tax purposes.