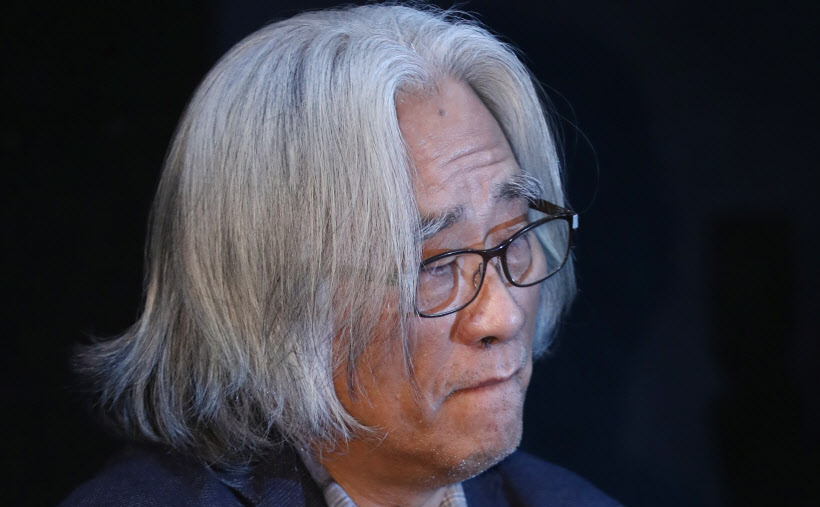 Lee Youn-taek, a prominent playwright and director, speaks during a news conference in Seoul on Feb. 19, 2018 to apologize for his sexual abuse (image: Yonhap)

SEOUL, Feb. 28 (Korea Bizwire) — South Korea’s cultural circles are in the midst of a reckoning over allegations of sexual misconduct. Misdeeds long kept under the rug are being exposed and the alleged perpetrators — many of them powerful and famous men — are facing overdue consequences.

Lee Youn-taek, a prominent playwright and director, made a public apology and resigned from all his positions in the theater world after sexual abuse allegations were brought against him by several women.

Yoon Ho-jin, nicknamed “godfather” of the theater musical scene, resigned as director of his long-running musical “Empress Myeongseong.” He also indefinitely postponed a press conference for the latest work from his production company.

Veteran actor Cho Jae-hyun resigned as executive director of the DMZ International Documentary Film Festival, which he had led since 2009, and as professor of Kyungsung University in Busan. The actor also pulled himself out of his main role in TV series “Cross,” which is currently being aired on the cable channel tvN

Kim Seok-man, theatrical director and former professor of the Korea National University of Arts in Seoul, was denied his candidacy as director of the National Theater of Korea due to allegations.

Despite his effort to get ahead of sexual misconduct allegations by admitting to them first, Choi Il-hwa, an established supporting TV and movie actor, came under harsh criticism after additional revelations on his past sexual misdeeds.

The MeToo movement in South Korea began a month ago when a female prosecutor went public with her story of having suffered sexual abuse. Seo Ji-hyun accused a senior prosecutor of groping her during a funeral dinner in 2010 and later using his power to have her unfairly demoted.

With more and more victims coming forward and public support growing, the seismic movement is rippling through various sectors of male-dominated Korean society. It is now making a huge splash in the cultural and entertainment circles, showing no signs of slowing down.

The first high-profile revelation in the cultural field came when female poet Choi Young-mi revealed her own experience of being groped by an unnamed senior poet in a poem titled “Monster” released early this month.

Although she did not disclose the name of the perpetrator but news media pointed to world-renowned poet Ko Un based on the details described in the poem.

After the revelation, Ko offered to leave his home and writing studio, which were provided by Suwon city government at the foot of a mountain in the city located just south of Seoul, citing demands from neighbors. He, however, has kept silent on the sexual abuse allegations.

The next runner was Kim Su-hee, head of a Seoul-based theater troupe who exposed the shocking side of prominent playwright Lee Youn-taek.

Kim said on Facebook that Lee forced her to massage his penis about 10 years ago when she was an actress. The revelation was followed by other allegations of the 66-year-old director’s sexual misconduct.

Ha Yong-bu, a traditional Korean dancer designated by the government as a human cultural asset, was also cited by many as a perpetrator of sexual assault. On Monday, he told Yonhap News Agency that he “acknowledges the allegations and will put everything down.”

Oh Tae-seok is another famous theatrical director allegedly involved in sex assault. The student council of the Seoul Institute of Arts issued a statement demanding the 78-year-old man resign as a professor in the college’s theater department.

“I just raised issue with a problem that has been prevalent throughout Korean society,” Kim told reporters on Monday, adding that the feverish response in the cultural-art sector to the MeToo movement is due to the sector’s vulnerability to such a problem. “Those are voices of women wanting to move forward a better society.”

Fans of theater plays and musicals rally in Seoul’s Dahangno area on Feb. 25, 2018, in support of victims who exposed sexual abuses long swept under the rug. (image: Yonhap)

The brave voices of women have touched off the “#With_You” movement in which theater industry people and fans express their support for the sex abuse victims on social media.

About 300 angry fans of theater plays and musicals rallied in Seoul’s main theater and art neighborhood of Dahangno on Sunday to express their support for the victims.

Wearing identical black masks, they chanted slogans such as “I support victims’ brave revelations,” “Audiences don’t want to see performance by sex criminals” and “Out with sexual violence in the performing art scene.”

“I’m here as a student interested in the performing arts, as I felt upset over a recent spate of incidents,” a 18-year-old high school student who only identified herself by her family name, Cho. “I want the perpetrators to be properly punished.”

“I like theater so much but had no idea if such things are happening there,” said another participant who identified himself only as a 24-year-old surnamed Lee. “I’m annoyed by the fact that such perpetrators of sexual violence can still ascend to the stage to perform,” he said.

Women’s rights groups convened a joint emergency forum the following day and voiced in unison the need to find a fundamental solution to the problem.

“In the MeToo movement, we need to pay attention to the systemic sexual discrimination beyond the realm of individuals. Gender itself forms power relation,” Lee Na-young, a sociology professor at Seoul’s Chung-Ang University, said during the forum. “Demonizing individual perpetrators would only provide disguised relief rather than fundamentally settling the problem.”

Shin Hee-joo, a female movie director, said, “Thorough fact-finding into the recently known cases of sexual assault is needed separately from police probes since their assailants are famous figures who have been yielding great cultural power for decades, and collective acquittal, aiding and cooperating have made possible a series of sexual crimes.”

The government responded to the seismic MeToo movement by announcing measures to toughen the punishment on sexual violence in the public sector.

The Ministry of Gender Equality and Family said on Tuesday the government will push to revise the national public service law to have public servants dismissed when they receive a fine worth 3 million won (US$2,800) or a heavier sentence for sexual crimes. They will be denied a chance to appeal their removal. The revision will also exclude workers with sexual abuse records from promotion to director-level posts.

The move came one day after President Moon Jae-in said during a meeting with his aides that he respects victims who spoke out and urged authorities to investigate the cases thoroughly.