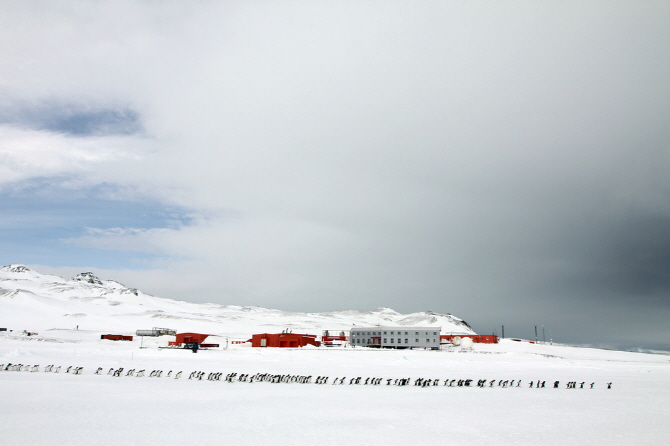 The KOPRI previously identified the number of penguins in Antarctica with the use of drones. (image: Korea Polar Research Institute)

A team of researchers at the Korea Polar Research Institute (KOPRI) said Tuesday that they had found pink-footed geese and ringed plover brooding eggs in the 82-degree north Greenland Sirius Passet area with drones.

A drone spotted 21 pink-footed geese on the sea ice along the coast, and one ringed plover in a valley on land. The drone flights lasted 20 minutes each over water and land.

It has been confirmed that precise detection was possible with the drone as the resolution is only 4.19 centimeters above 110 meters.

The average temperature of the sea ice in the Arctic was about minus 4 degrees Celsius, very low compared to the surrounding area, while the body temperatures of the pink-footed geese and ringed plover were high.

The differences in temperature activated the thermal infrared camera.

The research team applied the same method to the restricted area of Songdo, Incheon, and succeeded in finding six endangered black-faced spoonbills that were staying in the mudflats.

All the results clearly prove that there is a possibility of bird research using drones not only under extreme conditions but also in restricted areas.

Meanwhile, the KOPRI previously identified the number of penguins in Antarctica with the use of drones.