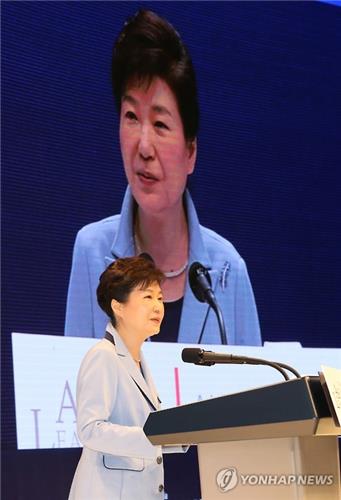 President Park Geun-hye speaks during the Asian Leadership Conference in Seoul on May 17. (image: Yonhap)

SEOUL, May 17 (Korea Bizwire) – South Korea should relentlessly seek a “path of innovation” rather than resting on its past laurels, President Park Geun-hye said Tuesday, underscoring that innovation is at the core of the country’s survival strategy amid a global economic slowdown.

During a forum in Seoul, Park highlighted that South Korea has been pushing for economic innovation through a set of economic reform initiatives including regulatory reform and investment in research and development.

“We cannot weather the crisis facing the world through the methods and paradigm that we have hitherto applied,” Park said during the Asian Leadership Conference hosted by the local daily Chosun Ilbo and the Presidential Committee for Unification Preparation. “Innovation — based on science and technology and creativity — is needed.”

She added that South Korea is adapting actively to global changes in economic trends by forging an “ecosystem” conducive to its creative economy drive and a three-year economic innovation plan.

Seoul has been pushing for the creative economy drive to create business opportunities by capitalizing on innovative ideas and cutting-edge technologies.

Park also said that charting a new path is always a “lonely and painstaking” undertaking, but without which the future would only be bleak.

Touching on the isolated regime in Pyongyang, Park called for international support for the ongoing efforts to pressure North Korea to give up its provocative policy stance and pursue “normal” development.

Under the main theme of “Asia Tomorrow: Innovation 4.0,” the annual forum deals with a variety of global and regional issues including the world economy, innovation, leadership, and peace and security in Northeast Asia.

The forum was also attended by the leaders of the three major political parties — Chung Jin-suk, the floor leader of the ruling Saenuri Party; Kim Jong-in, interim leader of the main opposition Minjoo Party of Korea; and Ahn Cheol-soo, the co-chair of the minority People’s Party.

Chung Jin-suk (R), the floor leader of the ruling Saenuri Party, Kim Jong-in (C), interim leader of the main opposition Minjoo Party of Korea and Ahn Cheol-soo (L), the co-chair of the minority People’s Party, attend the Asian Leadership Conference in Seoul on May 17. (image: Yonhap)