Greater anticipation was evidenced by the 50 or so people waiting in line on the morning of November 24 at KT’s iPhone X launch event. (Image: Yonhap)

Earlier in the month, the iPhone 8′s launch event via mobile carrier KT brought out a grand total of one person who waited overnight for the release. With consumer sentiment towards the eighth iteration of the smartphone lukewarm for a number of reasons, one of them the impending arrival of the iPhone X later on in the month, the tech powerhouse based out of Cupertino seemed for the first time to be experiencing a dip in fortunes on this side of the world.

Now at the tail end of the month, believers in Apple have seen their faith vindicated as the prior lack of customer enthusiasm has proved to be a momentary blip in the company’s unstoppable march towards smartphone dominance. In the days following the iPhone X’s official landing, news headlines have been inundated with reports of the flurry in pre-orders, and to a lesser degree over-the-counter purchases at mobile carrier and partner stores (Apple doesn’t have a brick-and-mortar presence locally, though that will soon change). The 10th anniversary iPhone has flipped the script.

Going on five days since the X was made available (the official release date was November 24), it has been widely reported that an estimated 120,000 devices were activated between November 24 and 28. According to industry analysts, that number is likely just the tip of the iceberg, as pre-order figures from the three major mobile carriers suggest 300,000 to 400,000 have been shipped. Even taking into consideration the possibility of calculation error, the industry is assured of the fact that final activation figures will be noticeably higher. 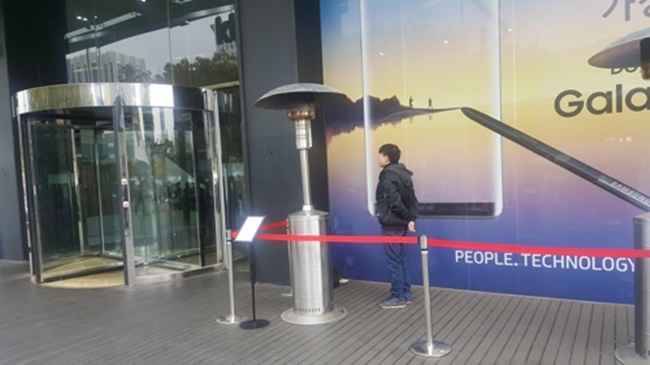 Earlier in the month, the iPhone 8′s launch event via mobile carrier KT brought out a grand total of one person who waited overnight for the release. (Image: KT)

Not only is Apple’s latest handheld personal computer a standalone star, it’s also giving a boost to its not as impactful teammates to boot. With the release date neatly coinciding with the nationwide college entrance examinations that were administered on November 23, purchasing predilections have extended to the not quite as sexy iPhone 8 and 8 Plus models, and even the iPhone 6S – thanks to generous discounts offered by SK Telecom.

This has returned the iPhone 8 and 8 Plus back to respectability. Activation numbers for the two in the first two days following their release were 140,000, 70 percent of the 200,000 activated during the same time period for the iPhone 7 and 7 Plus. However, throw the iPhone X into the mix, and that number (through first two days) goes up to 240,000 activated, prompting voices in the smartphone sector to say that Apple’s ‘double push’ strategy has been validated. When the iPhone 8 was released, many had been critical of the decision, believing that introducing two completely different generational models in such rapid succession would have a detrimental effect on sales.

The success the iPhone X is experiencing is somewhat surprising, as the lead-up to the release was not without some controversy. Media outlets pointed out that the South Korean price of the 64 GB and the 256 GB versions would be set at 1.42 million won and 1.63 million won, respectively (1.36 million won, 1.55 million won through mobile carriers as of November 30). In comparison, the device was to be released in a number of other markets, including the U.S., priced around 1.1 million won and 1.3 million won respectively, while in neighboring Japan, the 64 GB would go for 1.12 million won. The price discrepancy had at the time been the cause of some grumbling, but it has not been enough of a deterrent to keep the first wave of customers away.

The price discrepancy had at the time been the cause for some grumbling, but it has not been enough of a deterrent to keep the first wave of customers away. (Image: Yonhap)

Despite its early success, the iPhone has a long way to go before overtaking its counterpart the Galaxy series on its home turf – the Galaxy Note 8 surpassed 1 million units moved since its September release. Admittedly, with only a week having passed since the iPhone X launch, Apple has the advantage of time on its side, and in addition should be encouraged by the momentum shift brought about by the X.

The stark difference in anticipation was evidenced by the 50 or so people waiting in line on the morning of November 24 at KT’s iPhone X launch event. This time, the first person in line had truly earned his position by manning his place for seven days, a record according to KT. When asked about his decision to purchase the iPhone X, he answered, “Although I did think the price was a bit steep, I made the decision to buy it as I believe that it’s worth the price considering the many ways a smartphone can be used.”

In a statement that proves that fervor for the late Steve Jobs’ brainchild continues to burn strong, the long-enduring owner of a brand-new iPhone X said, “Until it loses its innovative edge, I’m going to stick with the iPhone.”