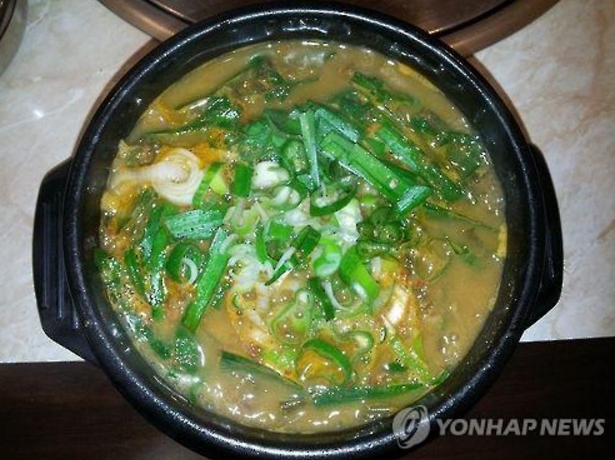 Boshintang is a Korean “invigorating” soup that is made with dog meat, but ongoing controversy regarding the morality of consuming dog meat in Korean society has reduced the consumption of dog soup, a dish that remained popular just a few years ago. (image: Yonhap)

SEOUL, July 28 (Korea Bizwire) – During hot summer days in Korea, a traditional custom is to eat “invigorating” food to counter the blazing heat that often leaves people weary and fatigued.

Boshintang is a Korean “invigorating” soup that is made with dog meat, but ongoing controversy regarding the morality of consuming dog meat in Korean society has reduced the consumption of dog soup, a dish that remained popular just a few years ago.

Most restaurants that specialize in dog soup usually see a surge in sales during the summer months of July and August, however this year many restaurant owners are complaining about a recent drop in customer numbers.

Young professionals, who often sought dog meat soup in the past, no longer turn to ‘boshintang’ alley during their lunch time, and that has contributed significantly to the shrinking market.

According to Seoul city records, the number of dog soup restaurants in the Seoul metropolitan area decreased from 528 in 2005 to 329 in 2014.

“Ten years ago, one restaurant used to bring in 10 million won every day during dog days, but sales have dropped by 40 – 50 percent in just five years. Dogs are raised differently if they’re to be eaten, but many pet owners don’t know that fact,” said Kim Yong-bok, a merchant representative from Moran Market in Seongnam.

Some experts point to changes in dietary patterns, the increasing prevalence of pet ownership in Korea, and persistent campaigns from animal rights activists as the primary factors contributing to the declining dog soup market. According to statistics provided by the Ministry of Agriculture, Food and Rural Affairs, more than 10 million people in Korea own pets.

Two British women protesting against the dog meat consumption culture in Korea also show how the issue has been attracting increasing global attention.

“Approximately 3 million dogs are slaughtered every year to be used for energizing food in Korea. Consuming dogs can be considered as the starting point of animal abuse,” said an animal rights advocate.

“While we’re fighting to ban dog meat consumption in Korea, the demand for dog meat has not actually decreased. Brutal slaughterhouses seem to have disappeared on the surface, however they still exist, hidden from our view,” said Seo Seon-il, director of the animal protection group Dasom.