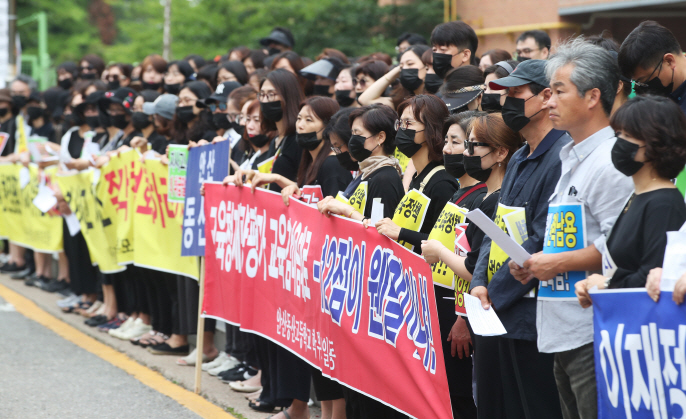 Parents of Ansan Dongsan High School students hold a rally at Gyeonggi Province educational office in Suwon, south of Seoul, on June 26, 2019, demanding the office cancel its decision to deprive the school of its autonomous private high school status. (Yonhap)

SEOUL, Jun. 27 (Korea Bizwire) — With its gleaming buildings, immaculate green landscape, and well-supplied library and science labs, Sangsan High School in the southwestern city of Jeonju has the trappings that befit an upscale university.

Founded in 1981 by a superrich educator, the school has long epitomized diversity, choice and freedom of education, as one of the pioneering and most successful members of an elite league of “autonomous private high schools.”

The special status, dating back to the early 2000s, has guaranteed far greater autonomy in admission, financing and curriculum than regular establishments, putting Sangsan in an advantaged position to attract bright, well-off students from across the country.

But the high-flying institution is now struggling with the possibility of losing the privileged status in a recent flare-up of a battle between conflicting views on education.

The education office of North Jeolla Province, where Jeonju is located, announced Thursday it will not renew the autonomous school license for Sangsan, because it was 0.39 point short of the minimum score on a 100-point scale in a performance assessment.

On the same day, the Gyeonggi Province education office also said that Ansan Dongsan High School in its jurisdiction failed to reach the achievement standard of 70.

The announcements sparked angry protests from the schools, parents and supporters of school independence.

He was infuriated by the fact that the region’s education chief, Kim Seung-hwan, set the bar at 80 points, higher than the 70 that was recommended by the education ministry and adopted by all other regional offices.

“To anyone’s eyes, it is utterly absurd.”

The school achieved high marks in most categories regarding school operations but received critically low scores on its recruitment of disadvantaged pupils though it is not obligatory for the school.

The school’s principal, Park Sam-ok, raised suspicion that the education chief, a staunch critic of the autonomous school system, intended to eliminate the school from the outset.

Park warned the school is ready to wage a legal battle against the decision. 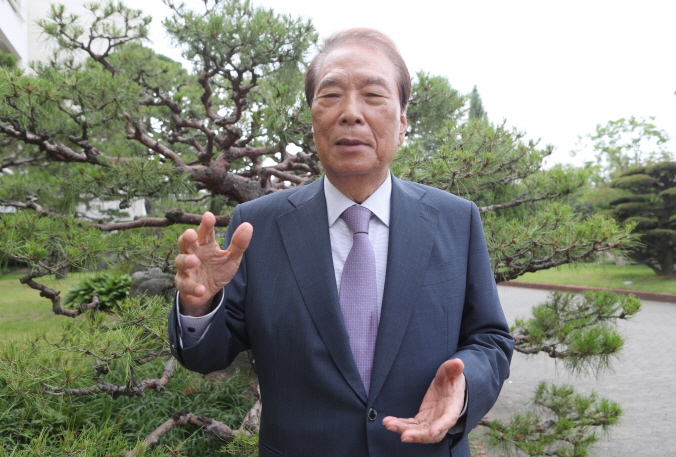 Education officials dismissed the criticism, saying establishing the standard is the superintendent’s legitimate right and that 80 points is not unreasonable for the higher-class schools, given many regular schools exceed 70.

As to the social responsibility issue, the office said it informed the school early enough.

On Tuesday, hundreds of frustrated parents of the Ansan Dongsan school held a rally in front of the Gyeonggi education office.

Wearing black mourning clothes, they hurled chrysanthemums at the building and called for the withdrawal of its decision.

In Nam-hee, chief of the parents’ association, denounced the authorities for making an unfair evaluation, saying they gave excessive weight to some categories in which the school underperformed.

“Prior to the assessment, the school and parents continuously raised its unfairness and requested dialogue with the education office, but our demand has never been met,” In said.

Education Minister Yoo Eun-hye has the final say. If she consents to the provincial decisions, possibly in July, the schools will be deprived of the coveted status and turned into regular high schools gradually.

During his election campaign in 2017, President Moon Jae-in promised to scrap the privileged category of schools, which he denounced for deepening inequality, stratifying schools and undermining efforts to improve the quality of overall education.

Minister Yoo told reporters Monday that there is no change in such a position and that she will exercise her right after closely examining local authorities’ decisions.

Currently 42 autonomous private high schools are up and running across the country and 24 schools are undergoing evaluations this year.

The Seoul education office plans to announce the results for 13 schools in the capital early next month. Most of them are rumored to have gotten failing grades.

The system was first introduced in 2002 as a pilot program with six schools, including Sangsan.

It was formally adopted and drastically expanded in 2009, when the then conservative Lee Myung-bak government pushed a major educational overhaul to salvage “crumbling” public education.

The standardized education tallied with the need to breed an able workforce that drove the nation’s miraculous development in the 1970s-80s and broadened access to education as a key tool for social mobility.

In the 1990s, however, educational uniformity proved unable to meet parents’ demand for high quality education, needed to send their offspring to excellent universities.

They increasingly relied on private tutoring and cram schools, resulting in neglect and deterioration of public education. 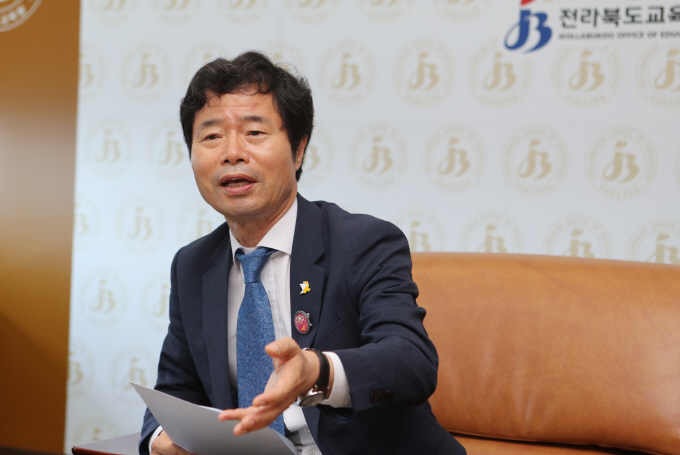 The autonomous private schools, along with other special-purpose institutions, were the keystone for the Lee administration’s pivot toward choice, diversity and competition.

The government also saved money by allowing them to charge far higher tuition fees than regular ones while receiving less state subsidies.

The new breed of schools, however, had some drawbacks that fed growing skepticism. They were found to use their leeway in creating the curriculum to increase their students’ chances to get into the best universities.

Most of them devoted more than half of their academic programs to Korean, English and math, which are core subjects on college entrance exams, according to the World Without Worries About Private Education, a civic group.

Their right to academically select students enabled them to siphon off excellent students from ordinary institutions, contributing to what scholars call the stratification of schools.

In addition, they were blamed for turning education into a profit-making business as they are allowed to charge tuition fees up to three times as much as regular schools.

The privileged group came under tougher pressure last year when progressive and liberal candidates with egalitarian creed won 14 of the 17 constituencies in elections for educational chiefs.

Seoul superintendent Cho Hee-yon, now in his second term, has a long history of campaigning against the elite schools.

In 2014, he pushed to remove six schools from the system, but the education ministry in the then conservative administration overruled his decision. In 2015, he sought to abolish four schools but only one was disqualified.

In a recent interview with Yonhap, Cho reiterated he will continue to advance the crusade.

The official was referring to a 2015 amendment of education regulations, which among others provided general high schools with increased autonomy in organizing their own curricula.

The government is also seeking to increase students’ choice of learning by introducing a credit system to high schools.

Conservatives are stepping up their attacks, warning that their abolishment will turn back the clock and lead the nation to the era of state control and equal mediocrity.

“Provincial and metropolitan education offices have gone too far with their abusive behaviors, such as unilateral and unfair decisions, to cancel the designation of the autonomous private high schools,” Ha Yun-su, president of the Korean Federation of Teachers’ Associations (KFTA), said.

“The government is aggravating social conflicts by being too attached to standardized education and preoccupied with high school system changes alone,” he said.

The government’s hostility toward the autonomous schools reflects its socialist views of education, he added.

Jo Seoung-lae, a lawmaker from the ruling Democratic Party, is concerned the debate is politicized.

He called for transcending the traditional, ideologically charged frame of equality versus excellence and considering the problem in light of a decreasing population.

In the past it was impossible to make all students competent, and policymakers must focus on a limited number of talents.

Now with a shrinking number of children, the nation needs to discuss how to raise the overall capacity of students and prepare each individual for a technology-driven future, he said.