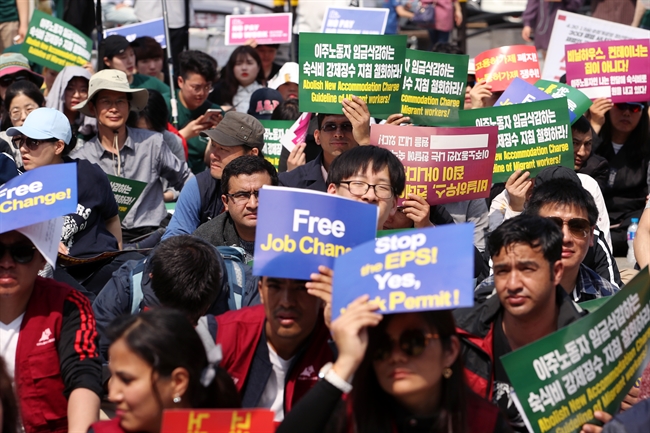 SEOUL, Jan. 3 (Korea Bizwire) — South Koreans have become more unfavorable to migrant workers amid the prolonged economic slump, with many reluctant to accept such workers as members of the South Korean society, a poll showed Wednesday.

According to the survey conducted by the Seoul-based Overseas Koreans Foundation from July 31-Aug. 25, 61.1 percent of the 820 respondents residing in the country’s seven largest cities answered that it is hard for them to recognize foreign workers as members of the country. The term “foreign workers” used in the poll refers to foreigners who work in the country for three years under the current work permit system.

The figure was up 3.6 percentage points from 57.7 percent shown in a similar survey carried out in 2013.

On the other hand, 38.9 percent of the surveyed replied that they accept migrant workers as members of society, down 3.6 percentage points from four years ago, the poll said.

On an estimate that Koreans are closed or discriminative against foreigners or foreign culture, 57.1 percent agreed, while 9.5 percent disagreed.

As to the purity of the single-race society, those polled showed much more open-mindedness than before. Asked whether a larger foreign presence here would harm such pureness, only 27.6 percent said “yes,” sharply down from 41 percent in 2013, while 42.2 percent replied “no,” up 10.4 percentage points.

On international marriages, 34.3 percent among the surveyed singles said they are open to them while 65.7 percent answered negatively.

“The ongoing economic doldrums are believed to have adversely affected people’s recognition over foreign workers,” Lee Song-joon, a senior member of GRI Research in charge of the poll, said.