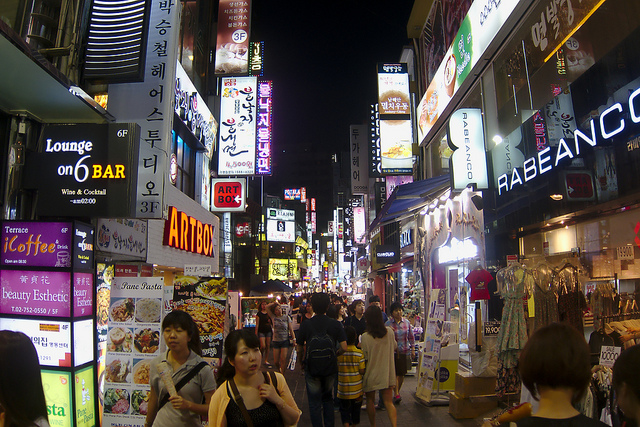 The average annual rent in Myeongdong this year was US$932 per square foot, a 17.5 percent increase from 2013. (image: Adrián Pérez)

SEOUL, Nov. 24 (Korea Bizwire) – Rents for retail locations in Myeongdong, a trendy shopping area in Seoul, are the eighth most expensive in the world, according to a recent survey. As more Chinese tourists visit the shopping district, real estate costs have risen sharply.

According to the “Main Streets across the World” survey released by Cushman & Wakefield last week, the average annual rent in Myeongdong this year was US$932 per square foot, a 17.5 percent increase from 2013.

The global real estate consulting firm released its annual survey analyzing the retail store rents of 330 commercial districts in 65 countries. In the survey, Myeongdong climbed a notch from last year, finishing close behind Japan’s Ginza district, which had an average annual rent of US$953 per square foot.

An official at Cushman & Wakefield Korea said, “As the number of Chinese tourists heading to this popular area keeps increasing, Myeongdong will continue to enjoy its status as home to the most sought after retail space in Korea.”

Meanwhile, the most expensive commercial location in the world was Upper Fifth Avenue in New York, at US$3,500 per square foot a year, which toppled the former No. 1 most expensive retail location, Causeway Bay of Hong Kong, which fell 6.8 percent to US$2,735.

The Cushman & Wakefield survey noted, “The rents in major commercial areas are increasing, but the pace is slow. Among the 330 locations, rents in 227 places increased or remained the same, but the average increase was only 2.4%.”