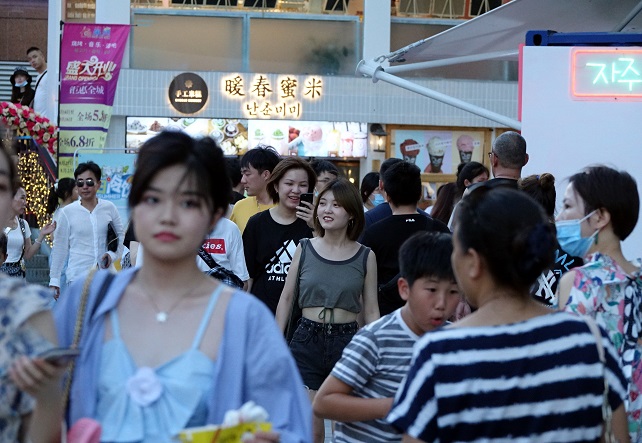 SEOUL, Aug. 19 (Korea Bizwire) — In the midst of the normalization of the Chinese economy thanks to its relatively successful containment of the coronavirus pandemic, the Koreatown in Shanghai is thriving.

Despite a lack of official statistics, merchants there are saying that the number of Chinese customers who visited the Korea Town to have a taste of Korean food has more than tripled in recent days.

Jingting Tiandi, a shopping mall located at the center of the Koreatown, was bustling with many Chinese people in their 20s and 30s last Saturday.

“Originally, the share of Korean customers was not low. But, in recent days, the share of Chinese customers in terms of overall revenue recently shot up to about 90 percent,” said Lee Seung-woong, the owner of a Korean restaurant located at Jingting Tiandi.

The boom time of the Koreatown in Shanghai is largely the result of the fact that overseas trips by Chinese people have declined sharply due to the coronavirus pandemic overseas.

Young people in Shanghai who once enjoyed travelling freely to overseas countries, including South Korea, are now quenching their traveling thirst at Koreatown, an exotic place dominated by a variety of Korean language signs.

Koreatown is almost the only place in Shanghai in which a variety of commercial units of a specific country are clustered.

Another factor behind the popularity of the Koreatown is that Korean culture is regarded as trendy in China, with Korean pop culture, including TV dramas, remaining popular among young Chinese people.

On Chinese social media platforms like Weibo, it’s not difficult to find those who took selfies holding soju shot glasses printed with Korean letters like ‘Jinro’ or ‘Chamisul’ at Korean restaurants in the K-Town.