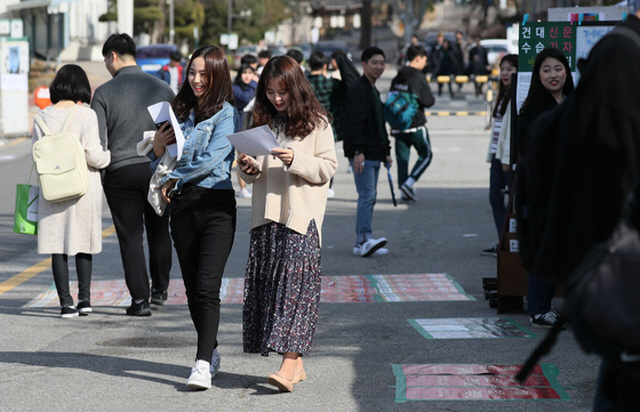 University students walk in the campus in Seoul. (Yonhap)

SEOUL, Nov. 4 (Korea Bizwire) — Many university student residences located in Seoul have been called on to revise the so-called “no curfew” rule, which is required by students.

Based on the results of the survey, the student council is seeking to meet with the school’s side, calling for the abolition of nighttime access control and random inspections at dormitories.

Meanwhile, in a survey conducted by the student council of Yonsei University in June of this year, 67.6 percent of the respondents said curfews should be abolished.

Park Yo-han, president of Yonsei’s student council, said, “The time to enter the residence is a basic right for adult students to decide on their own,” adding, “We will make efforts until the end to lift the curfew.”

However, schools have typically maintained their stance that curfews should be maintained, citing rising costs and safety concerns.

If curfews were abolished, schools would have to increase the number of security guards to ensure the safety of students entering residences at night.

Park Min-joo, vice president of the Hongik University student dormitories association, said “Unilaterally setting rules that limit students’ access to their housing and asking students to follow these rules is not right.”

Related to the situation surrounding university dormitories, the Seoul Metropolitan Government will also draw up guidelines to reflect human rights-friendly views in the operation of dormitories and distribute them to universities and dormitories.

“From now on, we are making guidelines in a way that allows residents to set rules after discussions through the municipal council,” a city official said.